Want to get in the restaurant business? Polonia is yours for $450,000 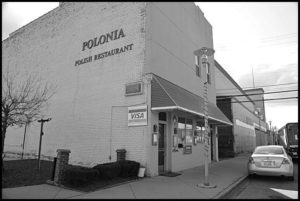 Polonia restaurant on Yemans St. is up for sale, which includes the building, all inventory, recipes and the liquor license.

By Charles Sercombe
For the second time in a week, another Hamtramck landmark business is making a huge change.
First, there was Hamtramck Drugs announcing its abrupt closing.
And now, the owner of Polonia restaurant, John Zurowski, has put his business up for sale for $450,000.
While not necessarily meaning Polonia will close, there is no guarantee the new owner will continue operating it as a restaurant.
However, in the listing for the Yemans St. business, it is said that Zurowski is seeking someone to continue it as Polonia, and is even willing to stay on to help with the transition.
The sale includes everything: the two-story building, the inventory, the equipment, liquor license and recipes.
Basically, it’s a turnkey operation.
The building is about 6,000 square feet, and has a finished second floor hall that has hosted numerous special events – including Christmas parties hosted by The Review newspaper.
Polonia is one of only two Polish restaurants left in the city – the other, Polish Village Café, is located just on the other side of the city parking lot that both share.
There is also one more Polish restaurant close by – Krakus on Jos. Campau, north of Carpenter.
Zurowski has owned the restaurant since 1986, but it dates back to the 1930s, when members of the local Communist Party would meet there.
This isn’t the first time Zurowski has attempted to sell his business. When there was a proposal in the 1990s to renovate the nearby former Shopper’s World building into a joint senior housing on top and retail space on the bottom, Zurowski was upset about losing parking and put the business up for sale.
Now, in both the Hamtramck Drugs situation and in Zurowski’s, it’s about the owners retiring.
The Polonia sale is being handled by Century 21 Hartford.
March 6, 2020