Want to get more connected? Head to the trails 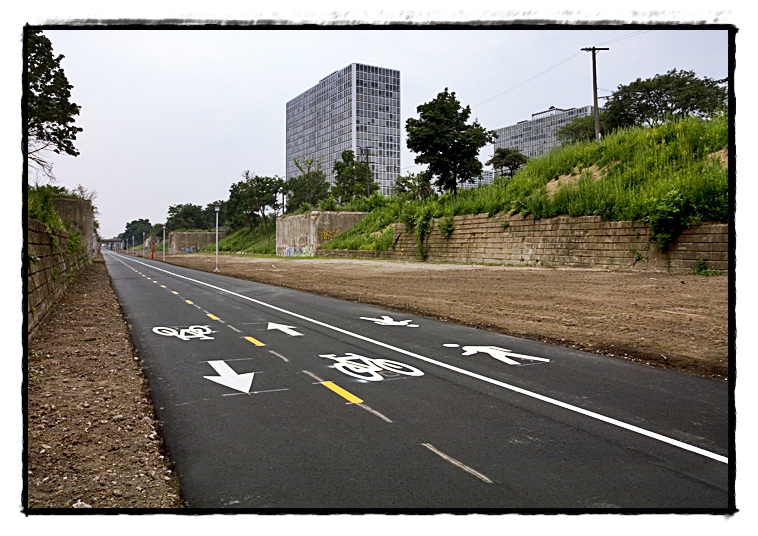 A few weeks ago, while I was at the remarkable gallery-studio-sculpture garden-live/work space called Popps Packing talking to its co-owner, metalsmith and woodworker Graem Whyte, the conversation turned from arty abstractions to practical connections on a human scale.

In the center of it all was Hamtramck’s piece in a developing cityscape narrative that is all about space and how to use it most efficiently. How, for example, to best connect people in Hamtramck, roughly in the center of physical Detroit, with people in Midtown, downtown, Woodbridge, Corktown, Southwest Detroit and other clusters of population density? Not by car; we already do that out of necessity. How do we bring people together in even more elemental ways?

What we imagined were trails, non-motorized pathways for bicycling, walking or running, crisscrossing the forested, uninhabited landscape of a post-industrial future; making personal two-wheeled transportation from the north side of Hamtramck to Wayne State University, to the Museum of Contemporary Art Detroit MOCAD), to happy hour at Cliff Bell’s or dinner at a taqueria on Junction near Vernor not only doable but environmentally smart and healthy.

Roads would also have bike lanes where trails might not work (but where wouldn’t they? Detroit’s most valuable asset going forward is abundance of space). Let’s say lanes that hug Hamtramck Drive to E. Grand Blvd. to Cass Avenue for access to Midtown and downtown; lanes on Warren and Forest avenues to access Woodbridge, and lanes on Trumbull Avenue and Rosa Parks Blvd. to access Corktown. To get to Southwest Detroit, an extension would veer west on Bagley St. and across the new pedestrian bridge that crosses I-75 into Mexicantown.

This imaginary model is separate, but compatible with the already opened Dequindre Cut, which follows an old rail line from Eastern Market to the RiverWalk. Eventually, when all pieces are in place, that trail is expected to flow northward into the proposed Hamtramck trail, linking the city and the waterfront via a ride of about 30 minutes (depending how fast you go).
Human-scale projects like these are happening all across the country (and have long been a part of everyday life in Europe), but nowhere is its potential more exciting than in Detroit, which is fast becoming a living laboratory for progressive ideas made real, much of it now on a grassroots level. Though more official projects are also targeted and in varying degrees of planning.

If you want to jump on board on the ground floor and become more familiar with area bicycle culture, head down to Wheelhouse Detroit, which offers tours that are more like a street-level education about Detroit. The tours are led by insiders who have an intimate knowledge of the city, its neighborhoods, architecture, parks and public art.

Each tour costs $25 per person or $35 with a bike rental. Space is limited to 15 bikes, so reservations should be made in advance. This Saturday, July 10, architect Brian Hurttienne will lead an architecture and design tour that will include Elmwood Cemetery, Lafayette Park, Brush Park, WSU and the Detroit Medical Center. The ride distance is 15 miles and runs 10 a.m.-1 p.m.

Later the same day, another Wheelhouse tour takes in Southwest Detroit, including a cruise past historic Fort Wayne, Woodmere Cemetery, Hubbard Farms residential community and restaurant row in Mexicantown. The tour is 2-5 p.m.

Wheelhouse Detroit has swung through Hamtramck several times on its neighborhood tours. While we plan a future network of non-motorized trails across the city, the tours and the full-service bike shop are well worth checking out now. It’s at the foot of Rivard St. at Atwater St. just east of the GM Renaissance Center. The address is 1340 Atwater. Hours are 10 a.m. – 8 p.m. daily.

For more info or to reserve a spot on a tour go here: http://www.wheelhousedetroit.com or call 656-2453.