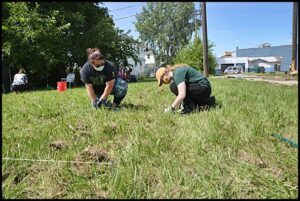 Wayne State University archeological students section off an area to excavate at Jos. Campau and Alice. WSU students will be at the site to find artifacts for the next several weeks.

By Greg Kowalski
Bits of broken glass, beads, rusty old iron nails and even marbles may seem to be no more than scrap, but they also can be clues to the past.
That’s why Wayne State University Professor Krysta Ryzewski has brought a second crew of students to continue an archeological dig at the site of the old Hamtramck Village Hall on Jos. Campau and Grayling streets.
The students are following up on a dig done at the site in 2018.
Built in 1915, the decorative building once housed the Village of Hamtramck police and fire departments and various village and city offices for decades until it was demolished in the 1970s.
It wasn’t the only building to occupy the site between Alice and Grayling Streets. Years ago, there was a tin shop on the north corner of the lot. The infamous Nut House bar was nearby also. And, even before 1913, there was a house on the southwest corner of the site, on Alice Street.
It’s mainly that piece of real estate that brought Ryzewski, and her anthropology students studying Archeology Field Methods, back to do another dig.
“This modest site contains a trove of invaluable information about the individuals who once lived here,” the students wrote, in their summary report on the earlier excavation.
“Learning about these individuals makes it possible to understand the similarities and differences between life in the past versus life in the present.”
Although much of the students’ efforts focus on the gritty work of digging in the dirt and salvaging artifacts, a lot of effort is also devoted to researching the site. That means plowing through old documents, maps, newspapers and photos.
That research has already yielded some fascinating information about the buildings that were there, including the house on Alice St. The students learned that the house was occupied in about 1910 by a man named James Morris, his wife Minnie, and their three children. James died in about 1922, and Minnie eventually moved to Trenton.
After Minnie moved, in about 1929, Walter Brendle, his wife Martena and their four children moved into the house. Another family later occupied the house, which was demolished in about 1979.
The students were also able to track down an amazing amount of information about the house’s occupants, including marriages and lifespans.
“By learning about these families, the history of Hamtramck becomes more solid,” the students noted in their report. For example, at some point the families took in “boarders” or “lodgers.”
“The presence of boarders and lodgers in the family home, young marriage ages, short life expectancies, a large number of family members living in a single home — even after getting married — are all aspects of American life that were extremely common during the 20th century but are rarely present today.”
“Understanding this information about the past teaches us about the evolution of American society over time, as well as the connections we share with individuals from this time period.”
There is more to the science of archeology than digging up objects from the ground, as the students’ report shows. Each bit of information, and every item, no matter how insignificant it may seem to be, is important in revealing the once-lost story of our past.
All of this contributes to understanding aspects of life in Hamtramck in the past, which in turn, gives an indication of how Hamtramck came to be what it is today.
No one knows what the students will find in the current archeological dig, but no matter what they do turn up, it will contribute to the whole story of Hamtramck.
Once the students have completed their excavations later this fall, there will be a presentation at the Hamtramck Historical Museum of what was found. More information will be available on the museum’s website, www.hamtramckhistory.org.
(Greg Kowalski is Executive Director of the Hamtramck Historical Museum.)
Sept. 11, 2020