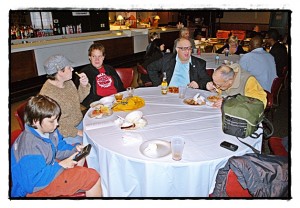 Last Thursday (Oct. 28) was a successful night for the Hamtramck Community Initiative (HCI).

The non-profit, which is the parent organization of the city’s Weed and Seed program, held a special fundraiser at the Gates of Columbus Hall to raise some cash for expenses not covered under Weed and Seed’s federal grant. The money will go toward insurance premiums, office supplies and other things that keep the program running and allow it to have an impact on the community.

But just because the fundraiser’s purpose was for the mundane didn’t mean the night had to be – included in the $20 ticket was an evening full of food, drinks and entertainment. There was a full spread of food from local businesses, an open bar and music provided by the Weed and Seed’s Police Liaison Sergeant Wally Tripp (a.k.a. Trippin’ Tunes).

And the best part?

With a target of $800, when the event was finished and the cash was all counted the final take was about $1,200. While it may seem like a small amount to keep a somewhat big organization running, in true Hamtramck fashion it’s a little amount that will go a long way. Weed and Seed Site Director Barbara Stachowski credits the event’s success to the city’s sense of community and says that it shows that people can still have an impact.

“The biggest success of the event was that the community responded, and in a short time too,” said Stachowski. “It shows us that as we evolve we can be even more successful and have a bigger impact in the future.”

HCI and Weed and Seed would like to thank the following businesses for their generous support of the fundraiser: Maine Street Restaurant, Maria’s Comida, Little Caesar’s, Post 10, Conant-Caniff Party Store, Boulevard and Trumble Towing, Garry Sacco, Gates of Columbus and the New Dodge Lounge.