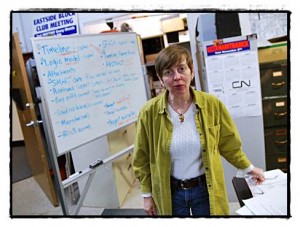 If things go right for Hamtramck’s Weed and Seed program, area gangs will have a lot more to worry about than who’s wearing what color.

The community advocacy organization just completed an application for a three-year anti-gang grant.

Funded by the Department of Justice, the $700,000 grant would begin in 2012 if approved. The timing couldn’t be better, either, as it would start just after the final year of the five-year Weed and Seed program.

Moreover, according to Weed and Seed Site Director Barbara Stachowski, the foundation’s accomplishments so far – particularly organizing neighborhood block clubs and the new radio patrol – has made the city an ideal candidate.

“The grant we applied for is very complementary in following Weed and Seed,” she said. “Everything that has been done so far has allowed for the city’s residents to become empowered to make a difference.”

In order to apply for the grant, Stachowski had to first establish that the city does in fact have a gang problem. To do so, she enlisted the help of Weed and Seed’s community organizer Raphael Thurin and police liaison Sgt. Walter Tripp to secure letters from the community acknowledging the problem.

Altogether, 14 letters of support were collected from residents and community organizations. Those agreeing that the city faces a problem include the Mayor Karen Majewski, Police Chief Mark Kalinowski, Hamtramck Public Schools Superintendant Tom Niczay and the leaders of the city’s block clubs.

Their letters of support will work in conjunction with the evidence of gang-related activity collected thus far. This includes anecdotal verification as well as graffiti that indicates the presence of Bloods, Crips and other ethnic gangs.

Though the problem in Hamtramck has not reached epic proportions, Stachowski says that one of the key components of the grant is the non-reactionary steps it takes to prevent gang involvement before it happens. She explained that it utilizes tools like Restorative Justice practices and other proactive measures and would be crucial in keeping kids in the vulnerable 7-14 age group off the streets and out of gangs.

If awarded, the grant will pay for the administration and oversight of the program, which includes both a Site Director and an Outreach Director. Additionally, it would fund a juvenile police officer and pay for prevention and afterschool education programs.

“Whether or not Weed and Seed is successful in getting the grant, our success is in applying for it,” said Stachowski. “Because of our work, we are now in a system that will allow us to apply for more funding in the future.”