What once used to be is now blight to neighbors 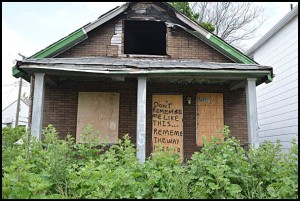 By Charles Sercombe
For the past three years, or so, Albert Andrus of Trowbridge St. has been trying to get the city’s attention.
He’s called and filled out complaint forms, but still, the burned out rotting house across the alley from him stands there.
And it doesn’t appear it’s going away any time soon.
In the backyard of 1995 Belmont, there are tall weeds and piles of tossed garbage that produces a stench so bad the neighbors next door can’t enjoy their outdoor pool.
Out in front, there is a cryptic message spray-painted on the front door, saying:
“Don’t remember me like this …
“Remember the way used to”
A political statement from someone ranting about the menace of urban blight?
It could very well be, but Andrus isn’t interested in politics.
“It’s a nuisance and hazard to our neighborhood,” Andrus said in an email to The Review.
“There have been three major fires during the past two years which have seriously threatened and damaged adjoining property. The overgrowth of foliage and debris from dumping is disgusting. Additionally it is home to numerous rats, possums and raccoons.” 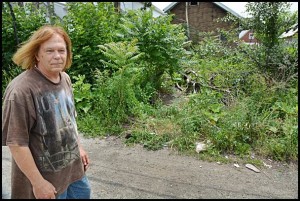 Albert Andrus has been waiting for the city to tear down a blighted house behind his Trowbridge St. house.

The city has been slowly clawing away at razing vacant houses that are beyond repair. It’s expensive, and whenever the city finds money it gets eaten up quickly.
There are many houses like this scattered throughout the city, each with an advocate demanding its immediate demolition.
Kathy Angerer, the city’s Director of Community & Economic Development since December, has been tasked with identifying these houses and scheduling their removal when money is available.
She said the owner of this house is now dead, but it’s unknown if there is insurance money to tap into to tear it down. If there is insurance, a portion of the policy is reserved to raze the property if that’s needed.
As a last resort, Angerer said, she can use money left over – if there is any – from other fire escrow funds. No matter what, it’s an exhausting process the city has to go through, which includes plenty of red tape to cut through and finding money to raze houses.
Typically, it costs anywhere from $4,000 to $7,000 to demolish a house.
In the meantime, Angerer said she and her staff are compiling a list of abandoned houses that need to be demolished.
“This will be the first time since I’ve been here that I’ll have a real list,” Angerer said.
She is also asking Wayne County to include these properties in future auctions.
Andrus, who is a retiree who keeps his house and yard in spotless condition, said work began to tear down the house but for some reason stopped.
“More than two years ago this property was marked for demolition. The asbestos siding was first removed by a hazmat team, and then all work stopped,” Andrus said.
In Hamtramck, at times, it’s small steps forward.