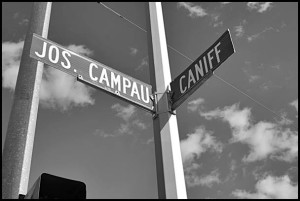 By Charles Sercombe
Hamtramck has its share of ceremonial street signs.
There is a street named for Polish Solidarity leader Lech Walesa, former Mayor Robert Kozaren, the Rev. Joseph Jordan and a sign on Conant in honor of the Bangladesh community.
Now, four Bangladeshi political groups want to add two more names, one on Caniff and another one on Jos. Campau.
But here is where it gets complicated. The groups appear to be competing with each other over who gets the streets renamed and in honor of whom.
The Bangladesh Awami League and the Bangladesh Association of Michigan want to rename Caniff in honor of the first Prime Minister of an independent Bangladesh, Shiekh Mujib. The two groups, however, differ on the full name of Mujib and how far on Caniff the ceremonial honor should extend.
Another group, Bangladesh Jatiotabadi Dal (BNP) Michigan, wants to rename Caniff in honor of Ziaur Rahman, Bangladesh’s first president after Mujib.
The Michigan Awami League, apparently confused over Hamtramck’s geography, wants to rename Jos. Campau to Conant in honor also of Mujib. (Jos. Campau does not intersect with Conant.)
But a fifth political group, the Michigan State Awami League, submitted a letter in protest of renaming a street after Rahman, saying he was a “ruthless cold blooded killer.”
According to a biography submitted by the Michigan Awami League, Shiekh Mujib wasn’t such a nice guy either. When he came to power as prime minister he banned all political parties but his own and closed down newspapers that were not state-owned.
He was assassinated during a military coup in 1975.
The requests were included on the city council agenda for next Tuesday’s meeting, but Emergency Manager Cathy Square pulled them.
Square said the request for Jos. Campau must be taken up with the Wayne County Commission because it is a county road. She said before any city street receives a ceremonial sign, there must first be a city policy on the matter.
“My concern is we don’t have a procedure,” Square said. “We’re starting to get a lot of requests. We have 53 streets, and we could have 53 ceremonial signs.”
City Councilmember Robert Zwolak, who sat in on a meeting between Councilmember Abu Musa and Square on Tuesday to talk about the requests, agreed with Square.
“If the requests keep proliferating, when will it stop?” he said.
On Wednesday, the Review tried to contact Councilmember Musa, who was listed as a member of the Bangladesh Awami League in the organization’s package of information for the council, but he said he could not talk because he was at work.
Musa said he would call back but by Thursday afternoon, when The Review went to press, he had not called.
Mayor Karen Majewski said the multiple requests have more to do with competing political factions in the Bengali community.
“I think the city is being used,” she said.