When gardening was a weapon of war 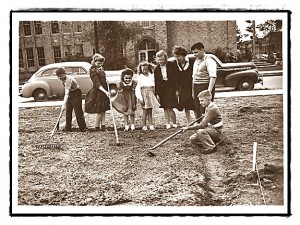 By Greg Kowalski
Special to The Review

Most people who dabble in the dirt do love cultivating their own food. But
there was a time in Hamtramck when gardening was taken so seriously, it was
governed by law. And if you broke the law, you risked a $100 fine and/or
90 days in jail.

City Ordinance No. 188 was passed in June 1943, and provided the stiff
penalties to protect the burgeoning number of gardens flourishing in the
city. But there was more at stake than protecting tomatoes and carrots.
America was at war, and the effort to defeat the enemy wasn’t limited to
the battlefields of Europe and the Pacific.

The war effort back home was widespread. Bond drives raised millions of
dollars for the government and seemingly every bit of scrap metal, rubber
and paper – even cigarette wrappers – was gathered and reprocessed for the
war effort.

Vast quantities of food and other resources were needed to maintain the
multi-million person American Army. That led to shortages at home, meaning
commodities like gasoline, coffee, sugar, flour and even – gasp! – whiskey
were rationed.

To help supplement the dinner table, people were encouraged to grow
whatever they could. So not long after the war began, people were taking
any spare spaces that were available and turning them into gardens –
“Victory Gardens.”

Hamtramck, like other cities across America, joined in and promoted the garden
concept. In March of 1943, the city began to regulate and promote gardening
through the local Office of Civil Defense, which maintained an actual
office, at 2361 Hewitt St.

At the time, 500 vacant lots were identified as suitable sites for Victory
Gardens. The owners were contacted by the city and asked to give permission
for their cultivation by would-be gardeners. In this way, persons who
wanted to garden but didn’t have their own space were given access to the
land. All a resident had to do was apply for a permit to plant there.
The proposal proved to be extremely popular. Even Mayor Stephen Skrzycki
put in a request for a plot. Plans were also outlined for a municipal
garden, to be operated by high school students, but it isn’t clear if that
was ever established. However, students at Copernicus Junior High School
did have a garden across the street from the school.

City Ordinance No. 188 provided a means for regulating the gardens, and
established a five-member Victory Garden Commission “to obtain from the
office of city assessor and preserve a full and complete list of every
vacant lot or available parcel of land in the city of Hamtramck, which
shall be useful or the cultivation of Victory Gardens.”

It also specified the penalties for vandalizing or trespassing at a
Victory Garden. There are no records of anyone being charged with a Victory
Garden crime.

But for the record, we did win the war.