When the lights went out 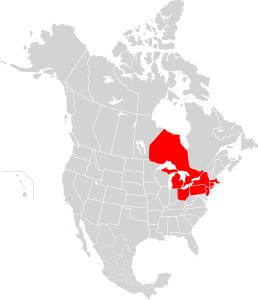 A map of the area that suffered a power blackout in 2003.

By Charles Sercombe
Fifteen years ago this past week, Hamtramck residents and 50 million others suffered a massive power outage.
On Aug. 14, 2003 — a Thursday — at 4 p.m., the power grid abruptly shut down here and all the way to New York City.
According to media reports it all started when a tree fell on a power line in Ohio, eventually knocking out power for the upper Midwest to the northeast part of the country and also Ontario, Canada.
One of the first thoughts for many – still sensitive to what happened on 9/11 — was that we were under a terrorist attack. Instead, it was a symptom of this country’s aging power grid, which has still not been fully addressed.
While there is never a good time for a power failure, this one happened during a heat wave with temperatures in the 90s and the humidity so thick there was a haze hanging in the air.
There were no reports of looting or other criminal activity except one incident that almost proved fatal to a police officer.
At 10:45 p.m. that first day, Hamtramck police officer Brian Misiak was chasing a suspect who had just robbed Mirage Jewelry when the suspect suddenly turned and fired a 12-guage shotgun he had been carrying in a bag.
Misiak suffered serious injuries in an arm and shoulder, but eventually he recuperated and returned to the force.
For many restaurants and markets, the power outage led to the loss of perishable foods worth thousands of dollars. For many households, it meant barbecuing up whatever meat, chicken or fish they had in the fridge.
The barbecues turned festive in some neighborhoods, where neighbors shared food and provided their own entertainment.
The former Citizen newspaper reported one such incident where Tim Suliman talked about swapping beer with neighbors and being entertained by a Bengali family who had their kids perform ethnic dances.
“We got to learn more about our neighbors, and it made a tough time a little easier,” he told The Citizen.
Power returned 30 hours later, at about 10 p.m. Friday. The Citizen noted that “when the lights did return one could almost hear a communal cheer erupt.”
The bars, which had been closed, immediately reopened and some still had cold beer on hand, The Citizen reported.
In other words, Hamtramck returned to normal.