Whiskey in the Jar is going to the dogs 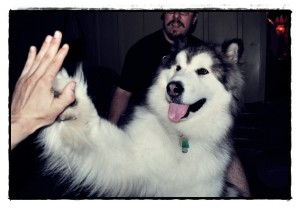 On Tuesday, Hamtramck’s venerable watering hole Whiskey in the Jar went to the dogs.

About two dozen mutts, pups and picture-perfect purebreds showed up with their owners to the Yemans St. bar to partake in “Drinking with Dogs.” The event was hosted by Detroit-based pet care company Canine to Five.

It was the second time the bar hosted the four-legged affair, which happens once-a-month from May to September. Started last year by Canine to Five owner Liz Blondy, the event has gained popularity with both owners and patrons alike.

Blondy says that dogs can help people feel more comfortable in unfamiliar surroundings, and their presence can help bring in customers who may otherwise not go out. Additionally, dogs can add a level of both levity and security to most situations.

“I want people to feel comfortable coming into the city,” she says, “and meeting up with like-minded individuals and groups (other dog owners) gives them a reason to go out. There’s a great sense of camaraderie in community.”

If you’re wondering how the dogs interacted with each other, it’s safe to say they were better behaved than some of the bar’s usual customers. Many of the dogs knew each other from Canine to Five, which trains and grooms dogs in addition to boarding them. For more information on the company, or to find out where the next Drinking with Dogs night will be, log on to www.caninetofivedetroit.com.