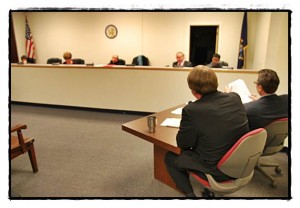 Hamtramck is one of a few cities in the state where newly elected officials have to wait two months before taking office.

The next highest vote-getter from the Nov. 8 General Election, Abdul Algazali, was sworn into office last week, following Miah’s sudden resignation, and was already on the job at Tuesday’s City Council meeting.

Algazali’s swift move into the council raises a curious question: Why should the three winners of the Nov. 8 council election have to wait until Jan. 1 to take office?

Hamtramck is one of the few cities in the state that has this weird lag time.

Out of 273 city charters the Michigan Municipal League has in its collection, only 25 to 30 communities have this two-month wait. In most cities, those who are elected in November take their oath of office within a week or two or else by the next council meeting.

It’s Hamtramck’s City Charter. Although it was revamped several years ago, there are still some antiquated aspects to it.
Former Charter Revision Commission member Scott Klein said he fought to update that aspect in the charter but met stiff resistance.

After serving on the Charter Commission he was elected to the council. He also tried to revamp the charter while on council in order to speed up bringing in newly elected officials.

“People elect a new council, and they need to get to work,” Klein said. “What’s the sense of having a lame duck council?”

In some cases, it could be a matter of something worse than a mere lame duck council.

It could be a matter of some sore losers being allowed to remain in power for two months, and cause all sorts of harm.

So, what are the chances of a change in the charter?

Probably pretty slim, since it would take a majority of the council to come to an agreement. The issue isn’t exactly on the front burner. And not only that, it would ultimately require voters to approve the change.