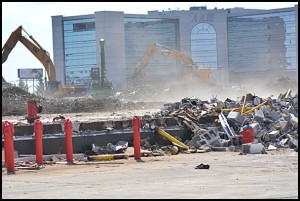 As the demolition proceeds at the American Axle site on Tuesday, strong gusts of wind created a dust storm that blew into the surrounding neighborhood. Residents called to complain about what they were breathing in.

By Charles Sercombe
“Have you seen the dustbowl?”
That was what Alan Shulgon said when he called early Tuesday afternoon to alert us to the dust clouds being whipped up by the wind at the American Axle demolition site.
Shulgon, a retired Hamtramck detective and a school boardmember, is not one to exaggerate. So we hopped in our car and drove over to the Lumpkin-Holbrook site and sure enough, huge dust clouds were being kicked up, spreading into the neighborhoods.
Around the corner at St. Aubin St., where the other American Axle plants are being demo’d, there were also huge clouds of dirt blowing into a Hamtramck neighborhood.
Christine Komisarz was out walking her dogs during the dust storm, and although her dogs seemed oblivious, her eyes filled up with grit.
“It was hard to see, and was not pleasant,” Komisarz said. “I thought, what am I inhaling into my lungs?”
American Axle began tearing down its plants a few months ago in an effort to market the site to a developer. A California company has since purchased 72 acres out of 111 acres that are being cleared.
Concern over what was in the dust reached the Detroit branch of the state Department of Environmental Quality, which confirmed that several calls about the dust were received.
“They need a dust control plan,” said Wilhemina McLemore, the District Supervisor for the Detroit office. “It sounds like we need to do additional investigation.”
A spokesman for American Axle told The Review that “there’s nothing harmful or toxic” in the dust.
Some of the plants date back to 1917. The only buildings that will remain face Holbrook, and will be leased out.
American Axle closed the plants several years ago and transferred production to a plant in Mexico.
Hamtramck lost hundreds of thousands of dollars in income tax and property tax revenue.
The American Axle spokesman, Chris Son, said the grounds will be covered after demolition, and that it’s possible the Hamtramck portion of the site will be developed by the company that  recently purchased most of the property.