Winter and summer bills pile up 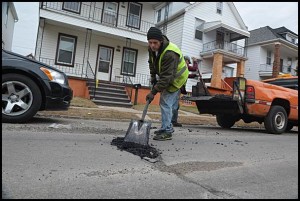 By Charles Sercombe
As everyone knows, last winter’s heavy snowfall and arctic temperatures took a toll on the roads.
Many streets in the metro area and were riddled with huge potholes. State legislators left cities hanging after not being able to come up with a financial plan to fix the roads.
That left cities on their own to make repairs. For many the only affordable, but temporary, answer was to cold patch.
It cost Hamtramck $49,124 to patch the streets, according to invoices submitted by Platinum Landscaping, Inc., the city’s contractor to clear and salt streets as well as cold patch them.
The Review obtained the company’s bills, submitted from May through July, through a Freedom of Information Act request.
There were also previous bills for cold patching during the winter season.
While Platinum had wide-range permission to cold patch streets, it only cleared and salted about a dozen streets and a few parking lots, according to its contract with the city. Those streets were mainly emergency routes.
There was one aborted city-wide clearing of side streets, which was concentrated mostly on the northeast section of the city.
The total cost of clearing and salting streets was over $800,000.
The Review also obtained invoices submitted by Platinum for maintaining city lots starting from May to the middle of July, the most recent invoices that were available at the time a Freedom of Information Act was submitted by the paper.
Maintaining lots includes separate charges for clearing and cutting. Clearing lots runs $40 an hour and cutting a standard lot costs $10 per lot.
Rarely, however, did the company submit a bill for the minimum cost.
For example, a lot at 3110 Goodson cost $400 to clean up. Another lot at 2442 Andrus ran $395. No explanation of the work performed was provided in the invoices.
The vast majority of the cost is for cutting grass. But some of those bills pose questions about the cost.
The cost for one cut at 11393 Dequindre was $352. There were many bills ranging in cost from $100 to over $200 – all for just one cut.
In total, the city paid $31,815 for maintaining over 170 lots, but the season still has a few months to go. It’s likely that bill will at least double by the end of fall.
While many of the bills beg for an explanation, complicating matters further was that overseeing the work and OK’ing the invoices during this time was Steve Shaya, the Director of Public Works.
It came to light only recently that Shaya admitted he is the uncle of the owner of Platinum, Omar Nakash.
Since that admission, Shaya has been on paid administrative leave to face accusations of violating the city’s ethics code and a violation of income taxes.
Previously, Emergency Manager Cathy Square declined to elaborate on the accusations. Square was unavailable for comment this week. Shaya was scheduled for a hearing on Aug. 11, but he filed a court injunction to suspend the hearing.
Shaya also has a pending Whistle Blower lawsuit filed against the city.