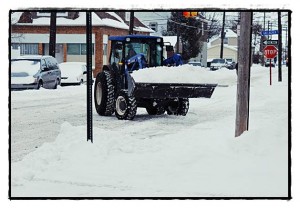 There’s a word that wiseacres have coined for the overblown TV weather hype of snowstorms: “Snowpacolypse.”

It makes fun of the over-the-top hysteria of weathercasters who might as well totally wig out and scream, “My God people, take cover!”

The “Snowpacolypse” alert level was ramped up with a very funny graphic created by local rocker, Rick Mills, who is no stranger to Hamtramck’s bar scene. We printed it here just for laughs. (Hey, Rick, when are the T-shirts coming out?)

For those of us not in the TV weathercasting business, Tuesday’s storm was more like, sheesh, it’s February. It’s winter. It snows.

Despite the heavy dose of weathermen meltdowns, this time their hyperventilation was, eh, sort of warranted. Sort of.

The brunt of the storm, which was categorized as a blizzard because of the high winds, skipped the Detroit area. But we did get a decent dumping of about five inches, maybe more depending where you live.

Other areas of the nation were hit much harder.

The expected storm forced local schools to close and the metro area in general to shut down.

In Hamtramck, the storm brought back a tradition thought to be extinct: residents putting out chairs to reserve parking spaces. On Wednesday, there were a lot of people digging out their cars. No wonder they didn’t want some interloper to come along and steal their parking spot.

“The problem with Hamtramck,” said a public school employee plowing the streets near the high school, “is that there is nowhere to put the snow.”

There was one thing this so-called monster of storms lacked: A name. Oh yeah, it was called “Blizzard of 2011” by the Channel 7 people, but that was lame.

We think our very own Wally Tripp of the Hamtramck Police Department came up with a winner.

Since the storm hit full force on Feb. 2 – which was Ground Hog Day – that made perfect sense.

As for that pesky rodent, “Punxsutawney Phil,” he didn’t see his shadow, which means spring-like weather is coming early, or so the legend goes.

For those of you keeping track of these things, spring officially starts on March 20, a mere seven weeks away.