Winter comes roaring in and just as quickly leaves 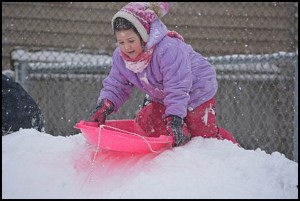 Although Monday’s dumping of about a foot of snow was an inconvenience to many, for kids it was a great time to get in some sledding on makeshift “hills,” like this one behind Immaculate Conception Church.

Winter was barely three weeks old when it suddenly came blasting into Hamtramck, as well as almost the entire country.

Starting on Sunday night and going through Monday, almost a foot of snow blanketed the city. By Monday afternoon a bitter arctic wind blew in, plummeting temperatures to minus 14 degrees.

Add in the wind chill factor and Hamtramckans were facing the equivalent of -47 degrees, or so local weathercasters said.

This was no ordinary wintery experience. A new term emerged from this cold weather snap called “polar vortex.” Go ahead, snicker. Plenty of people did upon hearing near-hysterical TV weather folks gushing over the phrase.

So what is a polar vortex?

According to news sources, it’s a super cold air mass that normally hovers over the arctic but was pulled down by the jet stream, reaching as far south as Atlanta where temperatures reached as low as 6 degrees.

In Hamtramck, the combination of the snow and bitter cold temperatures didn’t appear to cause any emergencies, say fire and police officials. Police Chief Max Garbarino said officers were told to be on special alert for pets that were left outside and to take appropriate action.

Foot traffic on Monday and Tuesday was sparse as temperatures hit a level where even momentary contact with exposed skin could cause injury. Hamtramck basically ground to a halt. 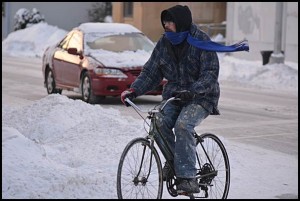 This guy was awfully brave and nimble to bike in the snow and frigid weather.

The cold and wind proved to be a destructive force for the fire sprinkler system in the Horizon Adult Ed building on Caniff. The sprinkler system burst and flooded the bottom floor of the building, said schools officials.

Hamtramck Public Schools also followed the action of most of the school districts in the metro area by cancelling classes until Thursday.

On Monday, city hall was closed, including the district court.

It’s thought that the area had not seen such a cold/snow event like this one for over 20 years.

By Saturday and Sunday, this week’s winter visit will seem like a momentary memory. It’s predicted that weekend temperatures will hit 40 degrees.

For those wondering, the first day of spring this year is March 20. That’s almost 12 weeks from now — for those counting.