Winter is not ready to loosen its icy grip 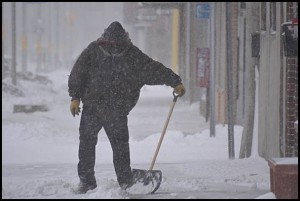 Once again, Hamtramckans had to dig out from a snow storm on Wednesday, which forced the closing of schools. Bitter cold also came with the storm. By this weekend, however, temperatures are expected to be in the 40s.

By Charles Sercombe
Six days to go.
Assuming you are reading this on Friday, next Thursday, March 20, is the first day of spring. You know, warm weather, leaves budding, birds chirping.
Of course, judging by the winter storm that hit us on Wednesday, you would have no idea that winter is on its way out. Some six inches of snow was dumped with winds that whipped up drifts and at times caused whiteouts.
Schools once again cancelled classes for the day.
At the time we went to press on Thursday, the weekend was supposed to be mild, unless winter decides to stick around.
Actually, it doesn’t matter. This winter has been so cruel and bitter cold, we’ll take anything over freezing at this point and consider it a heat wave.
Wednesday’s dumping of six inches of snow got us a little bit closer to breaking a record of snowfall for the season — just three inches shy of 93.6 inches that occurred in the winter of 1880-81.
The streets of Hamtramck were eerily empty-ish on Wednesday, but there were a few brave souls walking around, including Cnae Popoeski who was walking his bike home around 11 a.m. after working the early morning shift at New Palace Bakery.
“What do you think of this winter?” we asked.
“Won-der-ful,” came the snappy answer to a stupid question.
(Our apology to Mad Magazine for the “snappy answers to stupid questions” reference.)
And what about the bike?
“I didn’t think it was going to be this bad when I went to work,” Popoeski said, who we should note works the 3 a.m. shift.
Speaking of stupid questions, where is the best place to hone this art? At a bar, of course.
So with that chore in mind we headed to Bakers Street Car Bar where three gents were enjoying beer and television.
“So, what brings you out on a day like this?” we asked.
“I was out protesting Daylight Savings Time,” snapped Steven Was without missing a beat. “But nobody showed up — cause of the weather.”
As for all the snow days schools have used up so far, Was said that was unheard of when he went to school in the 1980s and 90s.
Being spared the experience of trudging through the snow and cold, he said, is leading to “no character in these kids.”
We’ll drink to that.