Winter season blows in with a huge dumping of snow 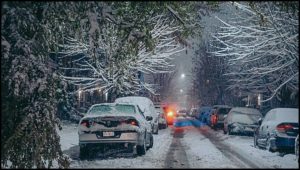 For Hamtramck and the metro area, winter came a month early on Monday when about 7 inches of snow blanketed the area.
Photo by Emily Pokoj

By Charles Sercombe
Monday’s snowstorm is one for the history books.
Approximately 7 inches of snow fell in Hamtramck and the surrounding metro area, and because the snow was wet and heavy, that led to tricky driving for many.
For those shoveling the snow, it poised a potential heart attack risk.
The temperatures this week are also some of the coldest we have had for November. Tuesday’s low of 5 degrees smashed the old record low of 12 degrees.
Despite the snow and bitter cold temperatures, the public schools remained open.
The last time we had a record snow fall in November happened in 1984 – oddly enough, also on Nov. 11. On that day, a little over 4 inches fell.
The snow here brought back an old tradition that was thought largely extinct: the use of crates and old chairs to save parking spaces.
At one time this was a common sight, and caused a number of neighbor wars. Hamtramck is a city where parking is limited and becomes fiercely territorial.
The city aggressively sought an end to the practice back when a state-appointed emergency manager was in charge of running things in the year 2000.
City crews would drive down the streets and collect the chairs. Apparently, residents ran out of broken-down chairs and eventually gave up on the custom.
As of Thursday, when The Review went to press, it looks like the metro area is heading for a warm up – into the 40s.
Winter, by the way, officially begins on Dec. 21.
So, what do the weather prognosticators have to say about our coming winter?
According the National Oceanic and Atmospheric Administration, Michigan may experience a colder and wetter winter season this year. Then again, the agency also said we have an equal chance of it being normal or even warmer than usual.
The folks over at AccuWeather.com have a bleaker prediction for Michigan. Button up, they say, because we are heading for a bitter cold winter, and the “cold air will encourage a number of lake-effect snow events,” they say. “Residents will want to stock up on shovels, as an above-normal season for snowfall is in the offing.”
Or as our office weather expert says: Who knows?!
Nov. 15, 2019