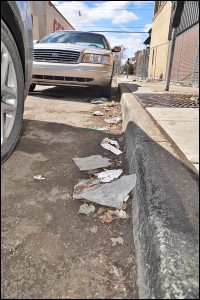 Now that the snow has mostly melted away, litter can be seen everywhere throughout the city.

By Charles Sercombe
Now that most of the snow has finally melted away, something ugly has popped up all over town.
Litter.
Yes, the hidden litter build-up happens in every city, but Hamtramck seems to have a worse case of it. No matter what time of the year, litter is a problem here.
And we’re not talking just about the main streets. Walk down any side street and you’ll be amazed at the amount of loose trash that has collected on the streets and in yards.
Although it’s several weeks away, the annual citywide Spring Clean Sweep will take place on May 17. You can find out more about the event at the Hamtramck Beautification Commission’s Facebook page, or by calling (313) 312-4045.
While litter is an eyesore, it’s also interesting to see what pops up. For example, in the city parking lot on Caniff and McDougall, we found a 10-pound bag of Chicken parts.
And you wonder why we have rats here.
A few feet over on an almost melted snow bank was the usual booze bottle, but framed with someone’s socks. Now that must have been some party.
Of course there are all manners of plastic items and wrappers, and stuff lazy people just throw on the street when they’re done with them.
Who are these litterers?
As you would guess, there’s a government study about that, which we found on the Internet. 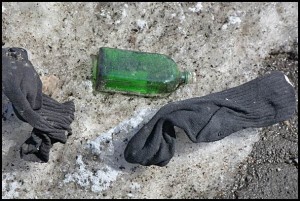 Above: Empty liquor bottle? Check. Pair of socks. Check on that too. Left: Ten-pound bag of chicken parts? Looks like we have all the makings of a party here. Just some of the predictable and strange items you can find on our streets and parking lots after winter blows over.

According to a study for Keep America Beautiful, it’s young males between the ages 11 and 24 who are the prime culprits. However, that study doesn’t address the issue of: Why?
People litter, again according to Keep America Beautiful, because they don’t have a sense of personal ownership of the property they litter on.
And that includes parks and beaches.
They also think that it doesn’t matter because someone else will clean up their mess.
While litter may seem like a small thing, it can lead to bigger cases of blight.
Hamtramck also has another unique angle when it comes to junk on the street: chairs and crates used to reserve parking in winter. 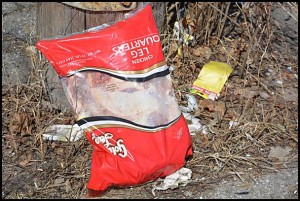 It’s probably a pretty good guess that we are done with experiencing a sizable snowfall.
With that in mind, Kathy Angerer, the Director of Community & Economic Development, says the city will begin to collect the chairs and crates within the next week if they are not removed.