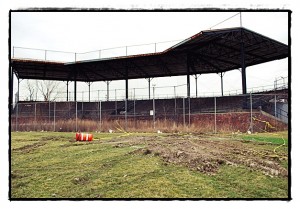 The new documentary on Art “Pinky” Deras’ isn’t the only thing related to baseball making headlines this week. The effort to save the stadium at Veterans Park continues to meet with success.

Last Thursday’s (Aug. 19) meeting of the committee to save the grandstands yielded a number of positive results and helped bring the effort a little bit closer to happening. In addition to being attended by a core group of preservationists – which includes baseball author/historian Gary Gillette, City Councilmember Cathie Gordon and historical preservation expert Rebecca Binno Savage, among others – the meeting also brought in former Major-Leaguer Ike Blessett and Hamtramck Recreation Commission President Dave Olko.

At the meeting, it was decided that the non-profit Friends of the Hamtramck Historical Commission will serve as the committee’s fiduciary. This will allow for donations going toward the preservation effort to be tax-free and will also keep the books open for public scrutiny. Moreover, it will provide for a way to disperse money after it has been raised.

Additionally, at the meeting it was also decided that a website should be created to help promote the effort. That task will be undertaken by the City Of Hamtramck’s IT professional. The idea is that with a website, news of the effort can spread more readily and rapidly, which could lead to a significant donation or sponsorship if it reaches the right person. And speaking of reaching the right person, there is also talk of filming a promotional video to help spread the word.

“Each state decides what is historical, so we’re still dealing on a local level,” said Gordon. “But because they only meet a few times a year, it will probably take a year for it to go through.”

In the meantime, word of the effort has already begun to spread. Two weeks ago, Rob Neyer, a senior writer for ESPN.com, mentioned the effort on his blog, saying that “one of my favorite research presentations at the SABR Convention last weekend was given by Gary Gillette, who discussed his research into a forgotten old ballpark called Hamtramck Stadium.”

In his post, Neyer also mentioned that Major League Baseball (MLB) spends a lot of money to highlight the contribution of the Negro Leagues to the sport and suggested the organization donate some money to the effort.

“Every summer, Major League Baseball goes to a great deal of trouble celebrating the old Negro Leagues,” he wrote. “So why doesn’t Commissioner Bud Selig kick in just a few thousand bucks to preserve the few Negro Leagues ballparks? And why doesn’t he establish a fund to mark the graves of those neglected Negro Leaguers. Seriously. Isn’t this pretty easy stuff?”

It’s questions like those that make Councilmember Cathie Gordon feel that the city is truly on to something with its bid to save the stadium. She says she thinks that the city can garner national news from the effort, which could ultimately lead to some big money from corporations like ESPN, Nike or the MLB.

She says there are lots of grants for historical sites, and the fact that this site involves African-American history makes it even more likely to receive one. Regardless, she says things are going in the right direction.

“I look at it this way: we’ve met one time and we already made ESPN,” she says. “If we market this right, who knows – we may have the Negro League ball game played here every year like they do at Tiger Stadium.”

The next meeting of the committee to save the stadium will be Thursday, Sept. 19 at 10 a.m. in the third floor conference room at City Hall.

One Response to Word spreads on repairing grandstand