Work on Belmont building will be coming up soon 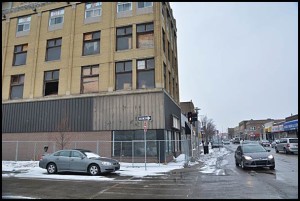 Fencing around the Jos. Campau-Belmont building should be removed soon now that the building’s brickwork and mortar have been secured.

By Charles Sercombe
It’s been over six months since a development firm purchased Hamtramck’s tallest commercial building.
And so far, at least from the outside, there has been little apparent improvements made to the four-story building at Jos. Campau and Belmont.
There is still a barricade around the building to keep pedestrians out of possible harm from falling bricks and mortar. In the meantime, the company that owns the building, Lafayette Lofts, Inc., has recently displayed a banner advertising loft space for lease.
That state of affairs led Mayor Karen Majewski to question whether there is a city policy giving building owners a deadline to make repairs.
There has been some movement forward, however.
Kathy Angerer, the city’s Director of Community & Economic Development, was given permission by the city manager to respond to a Review inquiry about the site.
(City Manager Katrina Powell has told city department heads that they must first get permission from her before speaking to the media.)
Angerer said that after speaking with the property management director she has been assured the building’s façade is secure and there will no longer be a danger of falling bricks.
The fencing, Angerer said, will soon be removed.
Drawings are being made to renovate the building for retail space on the ground level and lofts in the upper levels.
“The building has been shown regularly and while there has been an uptick in interest, there has not been a ‘deal’ completed,” said Angerer. “The management company has contacted both in-state and out-of-state prospects, national franchises and small and large businesses.”
Angerer further said that new windows will be installed once the weather breaks, and that there continues to be electric service in the building.
The Review attempted to get a comment from Lafayette but no one returned calls.
In June, Lafayette purchased the building from the city for $86,500.