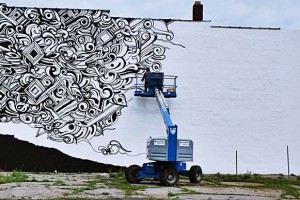 Hamtramck has been the center of attention lately with the arrival of internationally-known graffiti artists.

In a tribute to the tight-knit nature of graffiti artists around the country –and the world — a baker’s dozen of them descended from all points, spray cans and rollers in hand, to dress up Keyworth Stadium’s east wall, with the blessings of the Hamtramck Schools and the city council.

They came from as far away as Montreal, Los Angeles and even New Zealand, in no small part because of their respect for a local guy who goes by the handle “REVOK.” REVOK, along with FLYING FORTRESS, were the two street artists responsible for the “Welcome to Hamtramck” mural along Jos. Campau, north of Hamtramck Drive.

They are also being subsidized for their long journeys, their talents and their time. Montana Paint, which makes the highest grade spray paints preferred by many street artists, has funded the project, and is doing their own documentary on it as well.

Additionally, Hamtramck-based CONTRA Projects, the brain child of former CPOP Gallery owner Thomas Thewes Jr. and friends, had a hand in bringing in the specific artists chosen for the project. CONTRA is, according to their website, “a global project dedicated to supporting a small group of rebellious, visionary artists who straddle the worlds of high art and street art through world class public events and grass roots projects.”

CONTRA Projects, specifically, is “a special project highlighting a select group of artists to be showcased internationally at a variety of respectable art fairs as well as site specific mural and installation projects.” This mural project represents a perfect example of their incipient mission.

For this project, each selected a section of the wall approximately 20 feet wide, and started making it over with his (or her – female taggerdom is singularly represented) own design.

Often, they were covering up older, more “amateur” efforts. The stadium also abuts a railroad track, often another favorite haunt of graffiti artists, who like to display their talents on the sides of boxcars, for example. However, there is a large fence separating school property from the train yard.

And in any case, they were here on a focused mission.

ASKEW, who kindly let on his true first name (which shall remain a secret here), is a tall and easy-going New Zealander. Well-known enough to be easy to find through a google search of ASKEW “New Zealand,” he mentioned that graffiti artists often get a bad rap.

“That’s what they (the authorities) want you to believe, that (taggers) are all in gangs,” he said.

The truth is, that many of these once-reviled artists are earning growing respect in the art community, in the wake of eye-opening media events such as the film “Exit Through the Gift Shop,” which focused on British street artist Banksy (who still appears in shadow in the interview portions of the movie), as well as others of note such as American Shepard Fairey and French artist Invader.

REVOK, whose real name is Jason Williams, is a complex figure whose work, as of a year ago, was on display as part of an exhibit on street art at the Museum of Contemporary Art in New York City, even as he was being sentenced to 180 days in jail for violating probation in the Los Angeles area. He hadn’t met a judge’s prior schedule of restitution related to another tagging incident in the state. Los Angeles area police and prosecutors protested the New York art exhibit, largely because of the persistent biases ASKEW spoke of.

While they worked on completing the Keyworth Stadium mural, these visiting artists were simultaneously engaged in several other sanctioned projects around the city. San Francisco artist REYES, for example, did the large mural on the side of the old Veterans Post next to Kowalski’s on Holbrook.

More art, more young artists. You can put a positive “tag” on that.

For more info on CONTRA Projects, go to contraprojects.com.