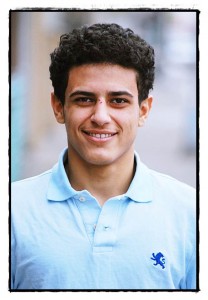 In wrestling, a little bit of determination can go a long way. Just ask Ahmed Fadhel.

Last weekend Fadhel competed at the Division 2 District Championships. Placing third, he earned the right to move on to this weekend’s regional competition in Holly, MI, where just two wins will catapult him to the state finals. Fadhel is the first wrestler from Hamtramck to qualify for a regional match.

But his feats don’t stop there. This year he recorded his 76th career win, and as a result he is the most-winning wrester in school history. Almost as impressive as that distinction is the journey it took him to get there.

When he began wrestling in his freshman year, Head Coach Adam Mused says that Fadhel was a “you-can’t-tell-me-anything” type of kid who was unable to wrestle an entire season because of a dismal .5 grade average. However, now in his fourth and final year of the program, Mused says Fadhel has turned around completely.

“He is the ‘feel good story’ that has inspired me to do more as a coach,” says Mused. “He has made a complete change, and I believe wrestling really saved him. His story can help future wrestlers in the city of Hamtramck.”

Indeed, Fadhel’s academic accomplishments are as impressive – if not more – than his on-the-mat undertakings. He currently boasts a 3.7 GPA and, after scoring an above-average 23 on his ACT test, was accepted by the University of Michigan-Dearborn. He will wrestle for the school’s team and is slated to receive a partial academic scholarship – with the possibility of a full ride in the future.

“For Hamtramck, it is a huge step to have quality wrestlers come out of the program and it shows that our progress is on track,” said Mused. “I have coached Ahmed all four years and have seen him grow with each year into a better student in the classroom and a better wrestler on the mat.”

The stats on Fadhel