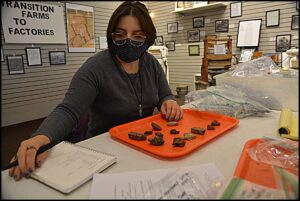 A Wayne State University student sorts through items that were recently dug up during an archeological excavation at Jos. Campau and Andrus that WSU sponsored.

By Greg Kowalski
A bit of a bottle. A piece of pipe. The sole of a shoe.
Trivial trash?
Not to the trained eyes of more than a dozen Wayne State University students, who are wrapping up part two of their archaeological dig in Hamtramck.
Two years ago, the students did the first phase of their project: digging into the history of the site of the old Village Hall on Jos. Campau, between Grayling and Alice streets. The second dig began in August, and wrapped up this week.
Village Hall was built in 1914, and also housed the village fire department and police station. Working under the direction of WSU anthropology professor Krysta Ryzewski, the students have collected an assortment of items from the site of Village Hall, as well as about 17 other buildings that occupied the area over the years.
The site included the famous old Nut House bar, a tin shop and a residence. All are long gone.
The goal of the class, Ryzewski said, is to interpret the items to learn about the lives of the people, mainly immigrants, who lived and worked there for more than a century.
“We’re looking to uncover the unwritten history that tells us about the rise of Hamtramck in the early 20th century,” Ryzewski said.
Even simple things, like a bit of a bottle, can reveal something about the lives of the people who were there, by showing what they drank. A fragment of an animal bone shows what they ate.
Individually, it’s not much, but taken together it tells a much more in-depth story.
Last week the students brought their finds to the Hamtramck Historical Museum, where they cleaned and processed the objects. Following correct Covid-19 operating procedures, the students worked either in pairs or singly, and all wore masks and followed proper spacing requirements.
Each student will now take one object and do a “biography” of it, explaining what role it played in the lives of the people. Eventually, an assortment of the items will be placed on display at the museum with explanatory text on what the students learned.
This second dig was held because the previous one was so successful. In fact, aside from revealing information about the past, the experience led Wayne State University to sign a Memorandum of Understanding with the Hamtramck Historical Museum, to cooperate on future projects.
The official signing saw Stephanie Hartwell, dean of the WSU College of Liberal Arts and Sciences, and Museum Executive Director Greg Kowalski each signing the document.
This agreement provides that the museum will offer internships to students, invite WSU researchers to participate in a variety of projects in conjunction with the museum, host guest lecturers from WSU, participate in joint grant writing opportunities, and publicize the joint ventures.
In return, WSU will recruit students to do internships at the museum, provide faculty consultation to assist with projects, help identify grant sources, invite museum staff to lecture at the university, and share digital media and library resources with the museum.
The Hamtramck Historical Museum is the first museum to sign a Memorandum of Understanding with WSU.
“This is a major step forward in our development,” Kowalski said.
And it just might lead to more digging into Hamtramck’s past.
Posted Nov. 13, 2020