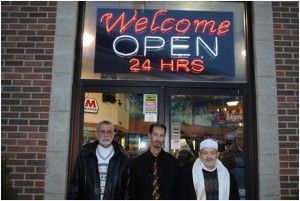 Normally, when the words “accident” and “gas station” come together to make news, it doesn’t have a happy ending. Fortunately, that’s not the case for the gas station/convenience store at Holbrook and Conant.

On Saturday (Jan. 15), the Marathon station celebrated its grand re-opening with a low key ceremony to commemorate the occasion. The gas station, located in Yazan’s Plaza, has been closed since April of last year, when a sudden power surge fried the building’s electrical components.

The problem began when the power company shut off service to the wrong address, accidentally disconnecting electricity to the gas station. Things only got worse when they returned to reconnect the power but made a wrong connection.

That wrong connection apparently caused the electricity to “cross arc,” sending a power surge throughout the building and rendering all electrical appliances – gas pumps, coolers, drink dispensers, televisions, signs and much more – useless.

Now, after nine months and over $420,000 in renovation costs, the station is back in business. Although those costs are being paid for by an insurance company, the business is still seeking to recover lost income during its down time.

None of that really seemed to matter on Saturday, however. The day was all smiles for owner Yazan Musleh. As he greeted friends, family and business associates into his store, Musleh, a Hamtramck resident, proudly showed off the newly renovated interior. Also on hand was a tasty spread of food from the Sultan Al-Kabob, a restaurant that recently opened on the corner opposite of Yazan’s Plaza.

Though the gas pumps couldn’t be turned on until Monday (Jan. 17) because of a pending final inspection by the state, the added delay didn’t seem to bother Musleh at all. He was just happy that the ordeal was over.

“It’s already been nine months, what’s a few days more?” he said. “I’m just glad to be back in business.”