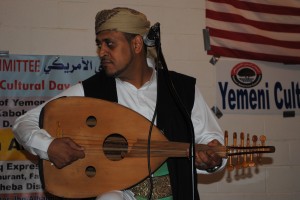 Yemen is a country with a rich cultural history, and last Sunday (July 1) it was all on display.
The first annual “Yemeni Cultural Day” was held at People’s Community Services.

The event, hosted by the Yemeni American Committee, sought to educate the community about the history and culture of the Yemeni people, many of whom live in the city of Hamtramck.

Starting with a hearty serving of delicious Yemeni food — graciously donated by Sheeba Restaurant on the southend of Joseph Campau — the informational part of the program began shortly after.

Next up was an incredible performance by two of Yemen’s most popular musicians. With just a hand drum and an Oud (a guitar-like instrument), Abduhl Alakhfash and Ahmed Alrdini played a very well-received set of traditional Yemeni music to the crowd.

After the duo’s performance it was time for some inspirational stories from a few Yemeni-American men who have found success in their lives.

The finale of Yemeni Cultural Day was a fashion show. Wearing outfits that included the abaia, dar’ah, zanah, several women modeled many traditional Yemeni garments that can still be seen on streets today. A male modeled traditional men’s clothing, complete with a jambiya (that cool-looking knife) tucked at the hilt.

Though the event was the first of its kind, it likely won’t be the last. Hussein Ahmed, Chairman of the Yemeni American Committee, said he was pleased, with and encouraged, by the turnout.

“We think it’s very important that these types of events happen on a frequent basis,” he said. “It’s important that we learn about our culture, see things, and show ourselves off.”