Yemeni community rails against the killing of a fellow immigrant 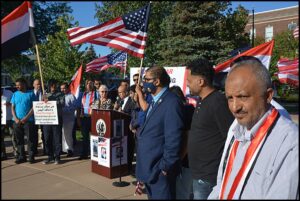 The Yemeni community held a rally last week in Zussman Park to protest the killing of a Yemeni immigrant who was on his way to visit his family in Yemen.

By Charles Sercombe
Last Thursday evening, local Yemeni-Americans held a rally in Zussman Park to protest the death of a California man visiting his homeland.
According to various media reports, Abdelmalik Alsanabani, 30, recently traveled to Yemen, arriving in the southern part of the country. He was traveling to his hometown in the northern part of Yemen, where he planned to visit his mother.
However, on the way there, he had to go through several checkpoints. At one of those checkpoints, militia men accused him of being connected with a rival political party, and was subsequently tortured and killed.
He was also robbed of $10,000 he had saved up, according to media reports, although some of those reports were conflicting.
This death underscores the many problems Yemenis face as civil war continues there.
Some local Yemeni-Americans blame Saudi Arabia for fomenting the civil war, and for also supplying military weapons.
At the rally, about 40 members of the Yemeni community formed a circle, and listened to speakers rail against the man’s death.
“This is not a Yemeni event,” said Dr. Kalid Shajera. “It’s a humanitarian event.”
Shajera added: “We will never, never stay silent until the criminals are brought to justice.”
There was also a call for all airports in Yemen to re-open. It was said that forcing people to travel through checkpoints has added to the dangers of living in the country.
There were also calls for President Joe Biden to step up and take action.
Posted Sept. 24, 2021