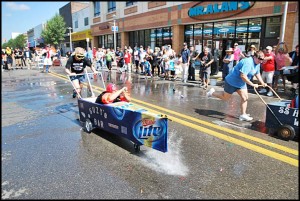 Up for a “yacht” race? If so, be sure to stop by the Hamtramck Labor Day Festival in two weeks.

By Charles Sercombe
It’s hard to believe, but in two short weeks thousands of people will be strolling up and down Jos. Campau.
The 35th annual Hamtramck Labor Day Festival is just around the corner. This year it comes a little earlier than usual, Aug. 30-Sept.1.
Now three years under the guidance of Konrad Maziarz and Shannon Lowell, the festival has grown from a handful of vendors to 60 and counting. There will also be at least 14 food vendors, including the ever-popular food trucks.
The festival has increasingly become known for its eclectic music line-up that features some of the very best in Detroit rock and roll. Compared to the much bigger Arts, Beats & Eats, Hamtramck is a hipster’s paradise.
Some of the featured performers include soul legend Melvin Davis, Motown Funk Brother Dennis Coffey, hillbilly crooner Michael Hurtt and the Haunted Hearts, a rare appearance by Hamtramck’s Volebeats, Hamtramck resident Eric Villa and the Vista Marias, punk rockers the Bill Bondsmen and Jimmy Ohio and the Ultimate Lovers, are just a taste of what’s to come.
Oh yes, the Polish Muslims will also be making their annual appearance, but they will play Saturday evening instead of their usual Sunday night slot.
For polkas lovers, come by on Saturday afternoon for the Kielbasa Kings and Big Daddy Lackowski.
Also on the festival grounds is the carnival area and rides for kids, something our city kids look forward to all summer. Besides commercial vendors, the Hatch artist collective will be hosting a space for local artists. So far, about 50 artists are signed up to display their goods.
There’s more to the festival than good eats, cold beer and hot tunes. On Sunday at 10 a.m. check out the annual Yacht Race on Jos. Campau near Edwin. The “yachts” are actually soap box derby-style carts steered by one team member and pushed by another. Along the route, onlookers are encouraged to throw water balloons.
That’s about as close to water it gets, but it’s as much fun as splashing around in a pool. And you can drink beer.
On Monday, you can get your body in shape for one more day of partying, Hamtramck-style, by running (or walking) in the Golab-K 5K. It starts at 10 a.m. and you can pre-register (online at hamtownfest.com) or on the day of.
The run starts at Jos. Campau and Holbrook. Look for a registration tent in the parking lot at the strip mall at the corner.
Later, the annual Polish Day Parade takes over Jos. Campau at 1 p.m. The parade is one of the highlights of the weekend, and it attracts not only tons of area Poles, but lots of former residents.
After the parade the festival continues for one final day to celebrate the final days of summer.

One Response to Yes, it’s time to party on JC