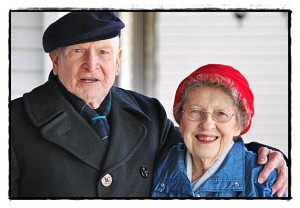 Between the Lines is a column that looks at the story behind the stories and people we come across.

What are the reasons we go this way instead of that way on the road of life? Ah, that’s one of the mysteries of the ages.

Especially when it comes to love and marriage.

You know how they say it’s a small world?

Well, as everyone knows here, Hamtramck is so, so much smaller. Plenty of folks have met here and married, and gone on to see their children repeat the cycle.

But things like this sometimes take a long and twisting path – even here in a small town.

Let’s look at the story of Frank and Camille Stock. I had the honor of interviewing Frank and Camille this week. Normally, when you interview folks you get a lot of information. Unfortunately, as interesting as that information is, it’s sometimes not relevant to the main story, and thus remains in my notebook.

I couldn’t pass up telling you about the bits and pieces I picked up on how this couple came to meet and marry. It’s not the complete story, but here it is nonetheless.

Frank, who just turned 90, survived the Japanese attack on Pearl Harbor 70 years ago come this Dec. 7. The Day of Infamy, FDR famously called it.

We have a story about his experience in this issue. Frank was right there at the beginning of the attack.

But just as amazing, is how he met and later married his wife Camille – who just might be the sweetest woman in Hamtramck – or at the very least on Whalen St. where she and Frank live because there are so many sweet and endearing women in this town.

Let’s start at the beginning — as Frank and Camille recall it.

They actually grew up living next to each other for a period. Frank was eight years older than Camille. When they were kids, Camille said, Frank would tease her because she would only speak Polish.

“My mother would get so mad at him,” she said. “Tears would be running down from my eyes.”

Frank laughs about it.

“Frank, do you still tease her?” I asked.

Well, years went on, and they went their separate ways. Frank enlisted in the Navy the day after graduating from Hamtramck High School in June of 1940. He was 19 years old, and he figured the country was going to war anyway, since France and England were under attack from Germany. He figured he might as well choose which branch of the military to go into before being drafted.

Frank saw photos of the dead and maimed soldiers who went through trench warfare in World War I, and he decided that being on the water was better than being on the ground.

Let’s face it, war is hell no matter where you are: on the land, on the sea or in the sky.

Flash forward to after the war. Frank amazingly — even statistically-speaking — survived from the very beginning to the very end of the war, with no injuries.

Go calculate the chances of that happening. It’s off the charts.

Since Frank enlisted before the country went to war, he had agreed to sign up for six years. The war “only” lasted for five years.

After the war, he was transferred to Washington D.C., and worked for the Navy in a machine shop. Then, after getting out of the Navy he went to work at a factory. He stayed out there for a year or more.

But then, he decided to come on home.

His dad had been a police officer in the Hamtramck Police Department. Frank decided to give it a try and applied for a job there as well as the Fire Department. He got the police job.

This moment is a key zig in the zig-zag of Frank and Camille’s life.

As a patrolman, Frank was paired up with Camille’s father. Whenever they came across an injured person, or suffered an injury themselves, they would go to Hamtramck’s St. Francis Hospital.

At the hospital, Camille was a nurse. The former neighbors met yet again.

And there you have it. A Hamtramck romance and marriage are born.

And Frank? He went all the way around the world, only to find the gal he would later marry and raise a family with had lived right next door all along.