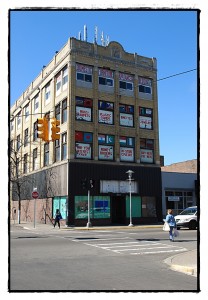 By Terry Parris Jr.
Special to The Review
It’s pitch-black, and we are walking up a creaking, twisting, wooden staircase of the tallest structure on the corner of Belmont and Joseph Campau. The owner of the building has the flashlight, and he’s a flight of stairs ahead. Whatever light is beaming from the thing doesn’t make it back to the rest of us who are using our feet as eyes to try to find the next step.

We had already putzed around City Hall, walked up Yemans, passed the Polish Village Café and slowed over an icy, unsalted sidewalk ordinance violation that Hamtramck’s Community & Economic Development Director, Jason Friedmann, pointed out, before ending up in this dark stairwell. As we made our way to this four-story work in progress he told me about the projects he’s working on beyond Hamtramck’s borders.
There’s the 4,800-square-foot, two-story building in the old Nortown neighborhood on Mt. Elliott and Nevada on Detroit’s East Side. He’s been working on it for three years and it’s about 90 percent done. He’s on the board of the Nortown CDC as well, which runs about 100 rental units for low- and moderate-income families. The building, he says, will be both commercial and residential.
He’s also the proud owner of a house in Brush Park, on the corner of Watson and Brush. It still needs a lot of work. He’s not living there yet, but hopes to be there by the fall. “It was built in 1894, and I’ll probably live there for the rest of my life,” he says.
Friedmann is also involved, through the Michigan Mountain Bike Association, in expanding Detroit’s Rouge Park mountain biking trails. “My big thing is bringing recreation access closer to the city,” he says. The park has 2.5 miles of trails, but it should have nearly 7 miles ready to go by the end of summer. “You’ll get some good laps on that.”

‘This is going to be awesome’

But let’s get back to the stairwell. I could finally see the flickering flashlight making its way back down a flight of stairs.
“We’re going to renovate this stairwell once we get moving,” says the building’s owner, Mark Hausner (who is also co-owner of the Belmont Bar, as well as President of the Hamtramck Downtown Development Authority’s board of directors). He adds, “Sorry about the lights.”
We get to the second floor where windows line two walls and the light is no longer a problem.
“This is going to be awesome,” Friedmann says, looking at the high tinned-ceiling and hardwood floor of this shotgun-style studio space. It’s covered in dust and paint chips. Boxes of records from the old first floor tenant — Record Graveyard — still linger. Rusted radiators don’t work anymore.
“We’re thinking this would be office space and turn the top two floors into loft units,” Hausner says. A Key West, Louisiana, soul food-style restaurant called Flavors, owned and operated by Hamtramck School Board President Titus Walters, is taking the first floor and looking to open up in May.
Moving upward, the third floor is like the second, but with more record boxes; and the fourth is like the third, but with a stack of mattresses hiding a pigeon skeleton.
Friedmann has held his position in Hamtramck for about a year and a half. He says a main goal is to keep getting the word out on Hamtramck, and all the good things happening inside its borders.
“We have the Blowout, and the Labor Day festival,” he says, listing just a few of the major draws of Hamtramck. “It’s important to get people to come here, and see what it’s like. People from the suburbs, they come here and they love it. Getting this word out, it’s good for Hamtramck, and it’s good for business.”
Friedmann tells me that Hamtramck has opened an average of 10 small businesses a month over the last year, 70 percent of which are owned by immigrants.
Hausner says he’s got another appointment, so we start making our way down. I think about blitzing Friedmann with a bunch more questions. Asking him about the $15.5 million the city just received from Phase II of the Neighborhood Stabilization Program, what Hamtramck needs to work on, what’s up with the master plan? Just then, however, Hausner offers us a beer at the Belmont and two seats at the bar to finish up. (Don’t worry, it was after 5 p.m.)
“Hamtramck is like a small neighborhood,” Friedmann says at the bar. “It’s 26,000 people surrounded by Detroit. We have the big city amenities and that small town charm. … We’re looking to enhance what we have.”
So, what about the master plan, something Detroit could use, as well?
Friedmann and the city of Hamtramck, with the assistance of a Philadelphia-based planning firm, Interface Studio, have one in the works.
“This will be our blueprint for moving forward,” Friedmann says. “This is getting everyone on the same page. And we need it for legal reasons, for going after grants. It’s not just a policy outline but also a document to obtain additional funding.”
The plan, which places an importance on community interaction, puts together long-term and short-term solutions to the various issues that plague Hamtramck — everything from putting block club operated garbage cans in the neighborhoods in order to cut down on litter to establishing a first of its kind in Michigan Corridor Improvement Authority (CIA). This CIA would bring Detroit and Hamtramck to the table, in partnership, to discuss demolishing vacant structures and removing blight from their shared borders.
Friedmann says the city has already conversed with the Detroit Economic Development Corporation about dealing with the blight around Hamtramck’s north end border.
Hamtramck has also received $15.5 million in NSP II funding to develop 99 housing units. Thirty-nine of those will be dedicated to the decades old housing discrimination lawsuit settlement, while the other 60 will be available to the general public.
On top of that, any funding left over will go toward establishing a deconstruction program that will start off with pulling down 34 homes and recycling the material that would otherwise go straight to the landfill. Wayne County currently operates a pilot deconstruction program, but Friedmann believes there is a lot of room to grow this idea.
“We could be a real leader in deconstruction,” Friedmann says.
It’s clear that Friedmann sees potential in everything: when he talks about his property rehabs, the mountain bike trails, telling Hausner how “awesome” his shotgun studio spaces could be, and, especially, when the word Hamtramck leaves his lips.
“There is so much here that makes life worth it,” he says. “The amenities, there is new stuff coming all the time. You can live a pretty cool, well-rounded lifestyle, and do your own thing here. And if you fail, you can jump back up and do it again. You can’t do that in New York.”
He tries to find a common thread in all his projects. “These are just things I’m interested in, I guess,” he says, laughing. “In a lot of ways they don’t seem to connect, but maybe they do.”

Reprinted with permission from ModelDmedia.com.