Has the shine of Hamtramck’s elections worn off? 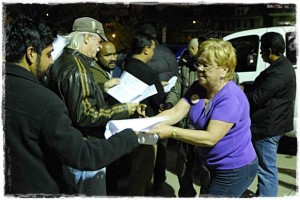 Tuesday's election results being handed out by an employee in the City Clerk's Office.

Eh, as an emerging power-house voting bloc, it had more of a purr than a roar this election cycle.

Looking at the bigger picture of things, overall turnout was low compared to other November elections. Only 1,835 voters participated out of about 11,000 registered voters, which is about a 16 percent turnout.

Last November’s election attracted 2,847 voters (25 percent of the registered voters), and that was not a particularly exciting ballot.

In the council race, the two top vote-getters were Polish-Americans. The third place finisher was Anam Miah, a Bangladeshi-American.

In the School Board race, the top vote-getter was Polish-American Magdalena Srodek with second place finisher, Nasr Saleh Hussain, a Yemeni-American.

Not that the ethnic results mean anything, considering this is a town full of immigrants. But in the last two years, the Bangladeshi-American community seemed poised to take over local public office. That appears to have backed off in the past two elections.

Oh, there is no shortage of speculation.

A leading theory is that some would-be voters got scared off by letters the city’s Income Tax Department is sending out to newly registered voters, informing them that there is indeed a city income tax and that they are expected to pay up.

Another theory is that the Bangladeshi voting community is just like any other voting community: after a while, voters become apathetic and look at the act of voting as more of a chore than a sacred right.

In other words: voter fatigue may have set in.

Or, it could be just one of those off elections. Let’s face it, there wasn’t much to get excited about with this ballot. There were only two races on the entire ballot: the council and the school board.

As for why Councilmember Cathie Gordon garnered the most votes, she said voters have turned a new corner.

“I think people are starting to understand that elections are about qualifications – not popularity,” she said.

Gordon also added she got the most votes because “I’ve not been shy at all. I make my presence known.”