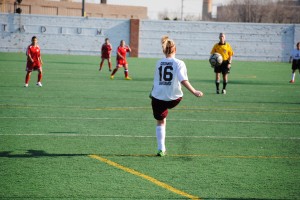 By Ian Perrotta
Though the first game of the season resulted in a loss, there’s plenty to cheer about for Hamtramck’s girls’ soccer team.
This season promises to be different than in years past. In addition to a lot of new faces, there’s a new coach and – more importantly – a new attitude on the field, one that is ready to win. The girls have been practicing hard for the last few weeks, and despite the early-season loss, there is potential for the rest of the season.
“The girls played really well,” said Head Coach Lauren Ealba. “They just need to work on the technical side of the game.”
The first game of the season was at home against Cesar Chavez. Though the Cosmos maintained control of the ball for a majority of the game, it was just a few plays that made the difference for the Aztecs, who ultimately won the game 2-1. Edna Jukstovic served as the goalie, and the lone goal for the Cosmos was scored by Senior Lindsay Tukes .
“We should have won,” said Ealba. “The ball was on their side more than it was on ours.”

One Response to Season looks promising for girls’ soccer team