It’s not often we get a chance to talk about the people and things we encounter in a more relaxed format, so to speak. In our new column, “Talk back …” our writers will have space to discuss what’s on their mind.

It’s no secret that I have worked previously for many years at The Citizen newspaper, which unfortunately went out of business over a year ago just as it was about to celebrate its 75th anniversary.

I had been with the paper for over 20 years, so you can imagine what a blow it was to see that Old Grey Lady go down. The last owner of the paper, Medow & Mayberry News Corp., gave it a valiant shot at keeping the paper alive but this stubborn economic slump was just too much to weather.

Like the proverbial cat with nine lives, I quickly found new work with this publication, The Review. I am happy to report that things are going well.

But I’m not here to talk about The Review. Recently, I moved and in the process of unpacking what seemed like thousands of boxes, I stumbled on a few items I saved from The Citizen days.

There is nothing amazing in what I kept, but it did trigger a few memories I thought some of you – especially those who have known me all these years – would enjoy. Or maybe not, which goes without saying.

The first thing I picked up from one of my moving boxes was an unopened bottle of “Hamtramck Beer.” I like beer and can drink just about anything (especially if it’s free), but this stuff was … Yech!

I could barely get the one mouthful down that I tried way back in the mid-1980s when it was introduced. It was brewed by the Michigan Brewing Company and was created as a marketing gimmick. It wasn’t a bad idea, it was just bad beer.

But the one guy who insisted on drinking the brew when city leaders gathered at the now long gone Polish American Club on Holbrook was former Mayor Robert Kozaren. Bob was fierce in his loyalty to all things Hamtramck. He died a few years ago and for many he was one of the greatest mayors Hamtramck ever had.

Bob had a lot of heart for the city, and apparently if something had Hamtramck stamped on it, he was there for it.

Speaking of bottles, I have another one, but this time it’s a special edition of Coke. Former Councilmember Joe Karpinski, who was like family to Bob Kozaren, works for Coca Cola and managed to get the powers that be in the company to issue a Hamtramck version of their 8-ounce bottle.

A limited number of bottles featured a special label honoring the city’s 75th anniversary. That was back in 1997. I’m not a big soda pop drinker, but out of all the colas there are I like Coke the best, and out of all the various versions of Coke I like the 8-ouncers the very best.

That was pretty neat seeing Hamtramck on a Coke bottle. Way to go Joe.

Next up in my box of nostalgia is a bumper sticker from the controversial era of Lou Schimmel. Lou was appointed by the state as Hamtramck’s Emergency Financial Manager after the city government failed to adopt any kind of a budget for two years in a row.

When Lou introduced himself to Hamtramck he encouraged the community to call him by his nickname,“Bud.” Remember that, because that nickname comes into play with this bumper sticker. Before I get to the sticker – and some of you already know what I’m talking about – it should be noted for historical purposes that Lou’s reign (some called it a “reign of terror”) lasted from 2000 to 2007.

It got to the point where folks were wondering if Lou “Bud” Schimmel would ever leave. During his seven years here, Lou went head-to-head with city employees and city officials – most notably Mayor Gary Zych, the guy who petitioned the state to send someone in.

In the last year or so of Lou’s occupation of City Hall, a bumper sticker emerged, saying: “BUD OUT.” The sticker also said it was paid for by “Residents for fair government.” There were rumors about who was behind it but no one ever came out publicly and admitted creating the sticker. 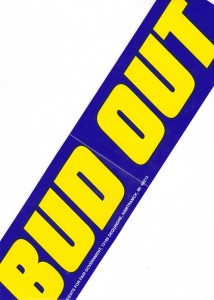 No matter, Lou had a bit (and I mean little) of a sense of humor and even asked if anyone knew where he could get the sticker in his farewell speech to the community. Lou, I’ve been waiting a long time to say it … this “Bud’s” for you.

Hamtramck has long been a campaign stop for politicians from the bottom of the ladder to the very top. FDR came here, and so did Truman and Kennedy and Reagan and the elder Bush.

Bush’s VP, the spelling-challenged Dan Quayle, also campaigned here. That was the first time, or so I think, the phrase “family values” was bandied about. That phrase is now a permanent part of the political lexicon but darned if I know what it’s supposed to mean. I mean, define what is a “family” and what is a “value”?

You can have endless – and to me pointless – arguments over that one. But what struck me in that campaign rally, which was populated by a bunch of suburban Republicans, was the in-your-face aggressiveness with that slogan.

At the end of the rally, I couldn’t help but get a laugh that one of the signs promoting “family values” was left on the ground where it was trampled on by the rushing Republican mob, acting like a herd of rampaging elephants, that couldn’t wait to get out of Hamtramck.

I took a photo of that sign, just as some beefy guy put his left foot over the word “values.” I find a range of conflicting messages in that one second of time — mostly unintended. One thing came to mind, though: Which “family value” is it to litter? 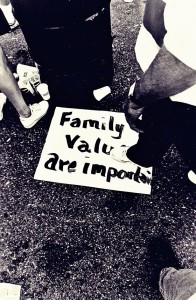 I can pretty much guess that the next photo I found, of a scantily clothed gal posing for an advertisement for the long gone Tom Dom Club, is not something Dan Quayle and his followers would consider a “family value.”

I’m gonna guess she was a stripper, or maybe she was a waitress.

Considering what you can see in many bars these days, she almost looks conservatively dressed, no pun intended.

I think I’ll keep this photo, just for old time’s sake. I think she deserves some respect.