The greening of America is in Hamtramck’s backyard 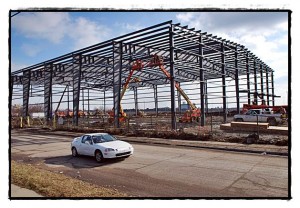 A new state-of-the-art recycling plant is under construction on Denton St., next to the county jail. The facility will recycle office products and light metals. It also means 40 to 50 new jobs will be created.

Recycling is coming to Hamtramck in a big way.

But not in the way you would think.

This isn’t about home recycling.

It’s about a huge plant that will sort out paper, plastics, Styrofoam and other office waste products, as well as light industrial metals, and turn them right around into more of the same.

The process produces very little waste product going back into Mother Earth. At least, this is what the people behind Hamtramck Recycling LCC say, and at this point there appears to be no reason to doubt them.

The plant is now being built on Denton just west of the Dickerson Wayne County Jail.

For those of you who have been here awhile, you might remember that cool looking all-glass factory building you could see while cruising down Hamtramck Dr., which is just south of Denton.

Well, that old glass building came down to make room for a new $7 million facility.

The promise of this plant and facility is that it’s not only contributing to the greening of America, it’s also adding jobs. About 40 to 50, says Jason Friedmann, the city’s Director of Community & Economic Development.

The jobs don’t pay much, but it’s a little better than minimum wage, around $8 to $14 an hour, Friedmann says.

Details about the expected property taxes that the city will collect were not immediately available. But the company is receiving a 50-percent tax abatement on property and personal taxes for the next 12 years.

Friedmann said considering the fact that the property previously wasn’t bringing in any tax dollars, it’s a “100 percent” growth deal for Hamtramck.

By about spring or summer, production should begin.