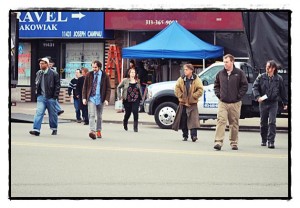 For about the third time, the Detroit-based television drama “Detroit 1-8-7” set up cameras here in Hamtramck.

On Wednesday, the production crew for the ABC show shot scenes at the Shadow Bar (or is it Ice Bar?) and during the night more scenes outside on Jos. Campau.

In previous shoots here, scenes were shot at Three Star Bar-B-Cue and at other locations along Jos. Campau.

It’s unclear if any Hamtramckans have been picked to be extras. There was some spillover for Maria’s Comida Mex-Asian Fusion, which was right next-door to the action.

Actors Michael Imperioli and Jon Michael Hall ate dinner there, despite having access to free catered food. Co-owner Marie Pronko said they stayed for over an hour and talked with the staff, customers and even Mayor Karen Majewski who just happened to be there for a business meeting.

“They were a great group, “we were thrilled,” Pronko said.

“I hoped I would get to see him. That was a real treat,” she said.

And in gossipy celebrity reporting tradition, here’s what Michael had to eat: the vegetarian quesadillas.

Huh? A vegetarian dish? Who knew?

Hall had the marinated chicken tacos.

Community Economic & Development Director Jason Friedmann said the city also gets to bask in the TV limelight by being able to collect permit fees and tax revenue from the visits.

He also said that Hamtramck has gained a reputation as a city that makes it hassle free to work here – unlike other nearby communities we won’t mention.

Unfortunately, it looks like the show may not see a second season as its ratings continue to plummet, according to those who report on such things.

Hint to producers: There’s a certain local newspaper editor just right for this series, and he has plenty of experience playing the role of a boozing, crackpot journo.