What’s worse than a condemned house? Try living next to one 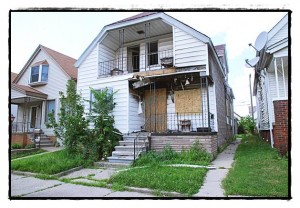 Tom Witkowski has every right to say this, but he hasn’t.

Or, if you prefer a more polite term, feces.

We mean that in the literal sense because the person who occupied the house had the habit of defecating on his couch, floor and anywhere, apparently, but the toilet.

How do we know this?

When the cops recently came to arrest the guy for income tax evasion, and possible child abuse, he was asked why there was so much excrement on the floor and everywhere.

The reason is not clear, but detectives told us that the man who had been living there is obese and has a hard time getting around. According to Witkowski, he noticed that numerous toilets were thrown out over the last few years since the man lived there.

Let’s stress the part about “was living there’ because the city finally condemned the house and forbade anyone from living there.

The cops initially arrested the guy for child abuse for allowing his kids to live in the filth-infested house, but that charge was dropped because the kids were not actually living there, but nevertheless, were there.

The story gets worse. Two weeks after the man was arrested and the house was condemned, on a Sunday morning at 3 a.m., the house mysteriously went up in flames.

But that’s not the key thing he’s mad about. He confronted the City Council at its most recent meeting, demanding to know when the house will be demolished.

“They write up tickets for what?” he said about city code inspectors who stopped by over the last several months. “Nothing is ever done. … You want to live next door to that?”

So, why is a nightmare house like this be allowed to fester and fester?

City Manager Bill Cooper said it’s a matter of the law protecting the rights of homeowners.

But what about the rights of homeowners next to a house in this condition?

You just have to keep on complaining, and eventually, the tickets add up to hefty fines and then possibly even arrest.

As for when the city will get around to tearing down the house next door to Witkowski, we asked City Manager Cooper what the plan is. He says he is working to take action with the insurance company that has a policy for the house.

“We’re trying to get this house torn down,” Cooper said.

But there’s an added problem. Witkowski said there are roaches and mice in the house.

Cooper said if that’s the case, he will first have to exterminate the house before knocking it down.

Perhaps more frustrating is that this house is not an isolated case. The city has dozens and dozens of houses in equally decrepit condition.

Cooper said violation after violation can be issued, and in some cases property owners just pay the fines, but ultimately, it takes time to force compliance – or to get to the point where a property is so bad it requires demolition.

The problem hasn’t escaped the attention of Cooper. He said his hands are tied because the city lacks the money needed to demolish the eyesores.

6 Responses to What’s worse than a condemned house? Try living next to one