When it comes to Hamtramck’s smartest, there’s no question about it 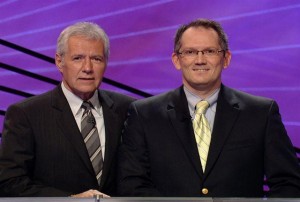 Answer: This Hamtramck resident will appear on the television quiz show Jeopardy on Wednesday, March 9.

Question: Who is Harley Savage?

That’s right. For the first time in 27 seasons of the show, the city will be represented by a contestant. And though federal quiz show laws prevent the outcome from being revealed, it’s safe to say the show will be worth tuning into.

The journey to the final taping actually began in January of 2008, when Savage initially took the show’s online test. After scoring high enough to pass, he was invited to Cleveland for an audition, but unfortunately at that time he was not asked back.

Two years later, however, the story was different. After once again passing the online test in January, he landed a successful audition in Chicago during the month of August, and by October he was told he would appear on the show. In November, he traveled to Los Angeles for the taping.

While filming the show, Savage said the activity in the studio is for the most part the same as seen on TV. Other than a few retakes to correct pronunciation mistakes and other missteps, Savage said the pace was fairly brisk.

One big difference between watching the show on TV and taping it live, as noted by Savage, was the fact that questions being asked during video clues were actually displayed for the contestants to read.
Additionally, he said that contestants could answer questions only after a producer unlocked their signal buttons. He also revealed that if a contestant buzzes in too early they are given a time penalty.

As for the show’s venerable host, Alex Trebek, Savage said he wasn’t able to interact much with him. Federal laws governing quiz shows prohibited Trebek from speaking with contestants before the show because he had already seen the questions.

Overall, Savage says he is happy with his experience and glad he got a chance to do it, although like most other players he would prefer to have done better. But regardless of that fact, it’s an experience that he will always cherish.

“It’s a once-in-a-life time opportunity, because once you’ve been on you can’t go back,” said Savage. “It’s almost bittersweet though – It was exciting, but I know I won’t be coming back.”

Harley Savage’s episode of Jeopardy can be seen on WDIV Channel 4 on Wednesday, March 9 at 7:30 p.m.