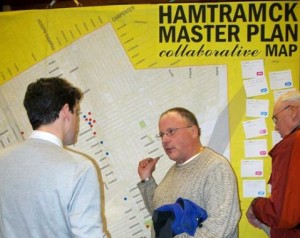 If you haven’t heard the news, there is a big change coming to Hamtramck. The city’s Master Plan is being revised, and the team guiding the process needs your help.

On Tuesday (Dec.the team in charge of the Master Plan revision process hosted their second Master Plan meeting at the Hamtramck Public Library to discuss their findings and give an update on their status thus far.
Community & Economic Development Director Jason Friedmann opened the night by reiterating the purpose and importance of constructing a comprehensive Master Plan.

“We’re working on creating a vision that will guide the development for the future of the city,” he said. “We want to make sure this plan addresses everyone and everything they want to see happen.”

The meeting continued with presentations from representatives of the Master Plan revision team. Philadelphia-based Interface Studio specializes in urban design and planning, while land strategies and transportation planning will be handled by Sam Schwartz Engineering. Anderson Economic Group is tasked with market research and economic development.

Scott Page, Principal of Interface Studios, explained that while his team was about halfway through the four-step process of creating the plan, no plans have been developed. “Tonight’s meeting is a ‘Just The Facts’ meeting,” he said.

One of those facts was the process of creating a Master Plan. The first step of a Master Plan revision is public outreach, which actually goes on throughout the entire process. The other steps are more linear and have definitive beginnings and endings. The second step, which researches existing conditions of the city to help facilitate planning, began in September and will soon be coming to a close. The third and fourth steps are actual plan development and implementation, respectively.

But the process isn’t ready for the last two steps just yet. Despite all the statistical analysis of land usage and distribution, all the information gathered about population density, and the collection of economic data, the most important part the planning process is the input of the city’s residents.

“Public outreach is the hallmark of how we do Master Plans,” said Page. “It is a bottom-up approach.”
Fortunately, there is still time for ordinary citizens to play a role in shaping the city’s future. At both the Hamtramck Public Library and Hamtramck City Hall there are huge maps which allow people to make suggestions or comments about the city. Additionally, an online map is available at :
http://tiny.cc/hamtramckplan