A final song and dance to Black History Month 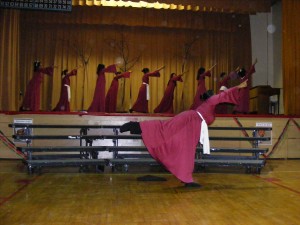 By Ian Perrotta
Review Staffwriter
There was a lesson to be learned last Friday at Dickinson West Elementary School. And it was taught by the students.
To cap a month-long observance of Black History Month, the students of Dickenson West put on a presentation to commemorate the struggles and triumphs of African-Americans. Titled “A Journey from the Past to the Present and into the Future,” the hour-and-a-half long program was packed full of entertainment and information.
The afternoon began with the Dickinson West Choir singing “Lift Every Voice and Sing,” a song often referred to as the Black National Anthem. The song featured a terrific solo by Kosciuszko Middle School student Dominique Davis and was followed by a liturgical dance performed by sixth-grader Lorene Walker.
After another song by the choir, which was enthusiastically led by Karonna Funderburg and Holly Gilbert, keynote speaker and Wayne State University Professor Yul Allen gave a brief presentation that asked the students if they were “daring to do the impossible.” The microphone was then handed to principal Corey Pitts, who told the story of how Black History Month came to be.
Another choir song showcased the vocal talent of custodian Eric Porter, and the event then spotlighted several students who gave in-character biographical monologues of several prominent African-Americans throughout history. The Dickinson Dancers then took the stage to perform an African dance.
Next up was a rousing rendition of African-American poet Maya Angelo’s poem “Still I Rise.” Enacted by a troupe of female students, each girl spoke a stanza of the poem then posed on stage until the end, when they united together to speak the poem’s final verse. If you ask anyone who was there, they will tell you the girls nailed it.
That performance was followed by a poetical tribute read by student Terrianna Wallace about former fifth-grade student Airic Powell, her nephew who passed away in early February from an asthma attack. Being a Michael Jackson fan, Powell would have appreciated the segueing routine by sixth-grader Dakota Travis-Gilmore, who danced to a mix of Jackson’s greatest hits. Imitating both Jackson’s moves and style – complete with fedora and one sparkly glove – Travis-Gilmore moonwalked his way through one thriller of a show.
The event was concluded by a final song by the choir with solos by Davis and second-grader Genesis Fitzpatrick, but not before a special dedication was made. As a way to show appreciation for the actions of others, each year the program is dedicated to someone who has had an impact on the community. This year the program was dedicated to School Board President Titus Walters and the late community advocate and black activist James Sephers.