A look back at the election 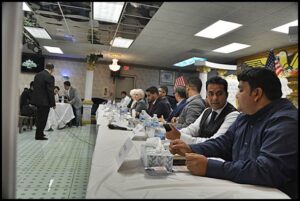 By Charles Sercombe
Recently, we published a report on how much the two mayoral candidates each spent on their election.
Election winner, and mayor-elect, Amer Ghalib raised about $25,000.
Incumbent Mayor Karen Majewski raised considerably less — only about $6,000.
While it can be argued that “money talks,” it is more likely that voter demographics worked against her.
Ghalib is a Yemeni-American, and the Yemeni population here in Hamtramck has increased greatly – as has its political influence. Majewski lost in a landslide, with Ghalib winning 68 percent of the vote.
However, only about a third of Hamtramck’s 13,000-plus registered voters bothered to participate in the election.
So what about the city council race?
According to the Wayne County Election Department, the winners and losers apparently received a waiver to report their finances, because they all raised or spent less than $1,000.
That’s not unusual for Hamtramck. The big money has traditionally gone to the mayoral candidates.
Are the financial stakes a part of the equation for the position of mayor?
Not really. The mayor’s “salary,” which is more like a stipend, is only a little over $6,000 a year, while the council “salaries” are just a little over $4,000 a year each.
This year’s election results were historical for Hamtramck.
For the past 100 years since Hamtramck became an incorporated city (that anniversary is actually in 2022), the position of mayor has been held by Polish-Americans.
Majewski was the last in that line.
Ghalib is not only the very first Yemeni-American to have that honor, but is also the first Muslim to become mayor here.
And in the council race, voters elected three Muslim candidates, including two Yemeni-Americans, which will make the council now composed entirely of Muslims.
Hamtramck has come a long way to this milestone.
It wasn’t too long ago that Hamtramck became politically charged when a “call to prayer” ordinance was proposed in 2004.
That proposal was widely misunderstood to allow the Muslim Call to Prayer to be broadcast – not unlike Christian church bells chiming throughout the day.
The ordinance was actually set out to regulate when the Call to Prayer could be broadcast to the public. That ordinance was passed by the city council at the time.
The issue attracted national and international media coverage, and deeply divided Hamtramck.
Since then, there has been an influx of Yemeni-Americans and Bangladeshis to the city.
Both communities are largely Muslim.
There was only one non-Muslim who ran for city council in the General Election – Lynn Blasely, who came in last.
The election also signals a conservative turn in the council’s and mayor’s positions when it comes to social issues, such as gay rights and the sale of recreational marijuana.
The local Muslim populace were vocally opposed to both issues.
No doubt, this historic election will be dissected and analyzed for years to come.
Posted Nov. 12, 2021

2 Responses to A look back at the election