A new era in Hamtramck politics has just begun 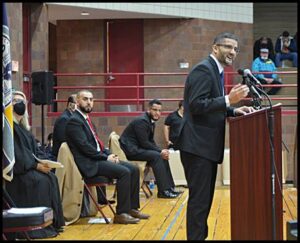 By Charles Sercombe
Hamtramck’s new chapter in politics started off with some showbiz pizzazz.
About 200 people came to the Hamtramck High School Community Center, on Sunday, to witness the inauguration of newly-elected Mayor Amer Ghalib and newly-elected City Councilmembers Adam Albarmaki, Amanda Jaczkowski and Khalil Refai.
But, before they were sworn into office, the audience was treated to musical performances by Anamika Roy, a radio and recording artist from Bangladesh, and Maria Saad, a 14-year-old 9th grade student in Dearborn.
Saad belted out the national anthem with a voice beyond her years.
This new crop of elected officials is of historical importance. The city council and mayor are now all Muslim – a first in the nation.
Ghalib is also the first Yemeni-American to become mayor of Hamtramck.
His election put an end to Polish-Americans holding that position for the past 100 years – when Hamtramck first became a city.
Outgoing Mayor Karen Majewski lost her re-election bid in a landslide defeat. Majewski had been mayor for 16 years, and a member of city council for two years before that. She had nothing but encouragement in her speech at the event.
She said this election is a classic example of the “American dream … as it unfolds on the narrow streets and close-knit neighborhoods of our little city.”
City Manager Kathy Angerer had earlier echoed the same sentiments, saying that “today the spotlight is on Hamtramck … It’s a shining example for diversity.”
Ghalib, who has never held elective office, came to this country when he was 18. He graduated from Hamtramck High School 21 years ago. He is a licensed nurse in Michigan, and is working to become a medical doctor.
When he stepped up to the lectern to speak, he was greeted with a rock star’s standing ovation, and whistles from the largely Yemeni-American audience.
He told of advice he received from a school counselor, in his graduate year at the high school, who convinced him to go into the medical field.
Ghalib said he actually wanted to pursue a life in politics. As a result, he said running for mayor was a return to his “first love.”
Ghalib also said that his victory represents “An opportunity that was once a dream becoming reality … This is a victory for all.”
He said his administration will be a “new chapter,” and that it won’t be one of “division, favoritism and exclusivity.”
He also promised to “not make decisions behind closed doors.”
As for the disagreements that happens with elective officials – especially in Hamtramck, where politics can be a blood sport — he said that he’s a “big believer of constructive dialogue.”
Closing out the ceremony was singer Augustus Williamson, who did a rousing version of a Paul Robeson song and a civil rights anthem.
Bill Meyer, chairman of the non-profit organization called OneHamtramck, put together the music portion of the event, and also played keyboards throughout the inauguration.
Posted Jan. 7, 2022