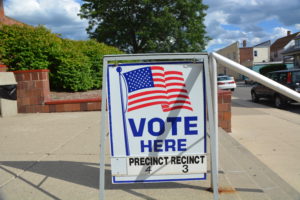 By Charles Sercombe
Voting in the August and November elections just got easier and safer.
Michigan Secretary of State Jocelyn Benson announced this week that, due to the coronavirus pandemic, all registered voters will automatically get absentee ballot applications for both elections.
“By mailing applications, we have ensured that no Michigander has to choose between their health and their right to vote,” Benson in a press release. “Voting by mail is easy, convenient, safe, and secure, and every voter in Michigan has the right to do it.”
Her action caught the eye of President Donald Trump, who lashed out at her for encouraging voter fraud.
In a Twitter posting he said:
“Michigan sends absentee ballots to 7.7 million people ahead of Primaries and the General Election. This was done illegally and without authorization by a rogue Secretary of State. I will ask to hold up funding to Michigan if they want to go down this Voter Fraud path!”
Benson and others pointed out that Trump was incorrect to say ballots were being mailed out. Only ballot applications are being mailed. Benson also pointed out she is not alone in taking this action. Republican election officials in Iowa, Nebraska, Georgia and West Virginia are mailing out AV ballots.
Trump later corrected his Tweet saying that ballot applications are being sent, but he still claimed this is an illegal act.
Trump has also claimed that voting by mail leads to fraud, but he has never presented any evidence to back up that accusation.
There are 7.7 million registered voters in the state, with 1.3 million on a list of voters who are to receive AV applications automatically.
Hamtramck has over 9,000 registered voters.
Once you have filled out the application, you can mail it to the Hamtramck’s city clerk office. The actual ballot will be mailed to you closer to the election.
In-person voting at the precincts on election day is still going to take place.
The August 4 election features primaries for the local state representative race, which features three Hamtramck candidates, and the county commissioner race for the district that includes Hamtramck.
City Councilmember Mohammad Hassan is one of a handful of challengers facing County Commissioner Martha Scott.
Scott has held public office since 1977, and has proven to be unbeatable.
Hamtramck residents running for the state representative seat are former Councilmember Shahab Ahmed, community activists Abraham Aiyash and Michele Oberholtzer.
The seat is unoccupied, and basically up for grabs. The seat became vacant after Isaac Robinson died apparently of COVID-19.
Also on the May ballot is a city millage increase proposal to pay for the pension costs for police and fire retirees.
Posted: May 22, 2020