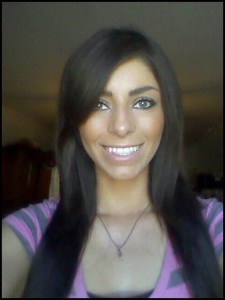 Christi Perovski landed the lead role of an independent film, beating out thousands of other actors.

By Alan Madeleine
Special to The Review
A current article in a major local daily newspaper gives census figures that would seem to indicate that the Arabic population has become Hamtramck’s largest single ethnic group.
Now they can add one more to their ranks: Princess Kamala, of the futuristic sci-fi take on the Arabian Nights, “Aladdin 3477.”
Christi Perovski, a 2008 Hamtramck High School grad who is actually of Polish and Macedonian ancestry, has scored the hotly-contested lead role, beating out some 10,000 original submitters in an online open call, she says.
“They got it down to 100 finalists, and then auditioned 12 of us,” she said.
She was ultimately their choice.
The “they” in question are the husband and wife filmmaking team of Matt and LinZy Busch, the director and producer, respectively, of the film.
Matt Busch’s movie credits include 23 separate listings primarily as a storyboard artist, both on films such as “Home Alone 3” and “The Matrix,” and TV shows like “Cosby,” “Melrose Place,” “Everybody Loves Raymond,” “Murphy Brown” and more, according to the Internet Movie Database (imdb.com). A storyboard artist creates drawings for the director that suggest camera shots and angles, movements, and so on, as well as helping to conceptualize the overall look of the film.
Perovski says that Matt Busch has also worked as an artist for Marvel Comics and George Lucas’ Star Wars franchise.
“Aladdin 3477” is currently in pre-production, although Perovski tells The Review that filming actually began last weekend in the Lake Michigan sand dunes near Ludington. The film is presently budgeted in the $100,000 range, cheap by today’s standards, especially for a presumably effects-heavy futuristic piece.
Perovski said that the filmmakers are even working around her school schedule, as she finishes up her paralegal studies at Wayne County Community College before transferring to Madonna University next year. And yes, she says, the role is a paid one, although she admits that the picture is being shot outside the protection of the Screen Actors Guild union.
Spotted in a mall at age 11, she first tried runway modeling, but was deemed too petite, she says. By the age of 14, she had transitioned to acting, and spent a week studying in New York City at the International Modeling & Talent Association honing her new craft.
It appears to have paid off nicely for her.
Back here in Hamtramck, she lives with her family, including a brother who still attends Hamtramck High, and her mother, who works at Dickinson East Elementary.
We wish her success!