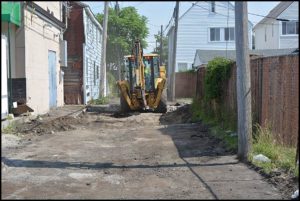 Despite having a budget deficit, city officials agreed to continue the alley repair project this year.

By Charles Sercombe
Even though there is a budget crunch this year for the city, alley repairs will continue this season.
The city initially was only going to complete alley repairs that were left over from last year’s funding.
But despite having to dip into the city budget surplus by $1.8 million this year to make ends meet, the city council decided to add $200,000 to the budget to keep the alley project going.
Mayor Karen Majewski said she didn’t want to see the gains made in capital improvements to come to a halt. Councilmember Anam Miah agreed, saying, “If we don’t address it, the burden is going to be on someone.”
With that said, the council, except for Councilmember Andrea Karpinski, agreed to add on $200,000 to the budget for alley repairs.
Last year, the city allocated $300,000 for the project. The city initially was not going to add any money to this year’s new budget, which starts on July 1.
To balance the budget, city officials are dipping into the $6 million budget surplus.
City Manager Kathy Angerer was tasked with coming up with a plan for this year, which may include a combination of repaving and spray-patching. The final plan will still require the council’s approval.
Left over from last year are the following alleys to be repaved:
o Gallagher/Sobieski, Casmere to Commor
o Klinger/Moran, Commor to Carpenter
o West Conant, Caniff to Casmere
o South Caniff, Dequindre to Lumpkin
o East Conant, Yemans to Evaline
o East Lumpkin, Casmere to Commor
Alley repairs began three years ago.
The first year of the program was concentrated on repairing parts of the main alleys adjacent to Jos. Campau and Conant, since those alleys are the most heavily travelled in the city.
In the second year of the program, the city branched out to include some residential alley repairs.
This time last year, it looked like the alley repair program might continue indefinitely.
But now the city is facing the likelihood of GM closing its Poletown Plant. Hamtramck receives about $850,000 per year in lieu of property taxes from the plant.
GM announced it was ending production at the plant several weeks ago, giving no prior heads-up to the city.
A number of other cost increases have also required city officials to dip into the $6 million surplus.