And they’re off and running 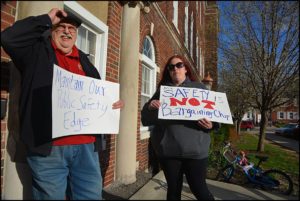 City Council candidate Carrie Beth Lasley kicked off the campaign season by holding a protest at city hall against a possibility of combining police and fire services into a public safety department.

By Charles Sercombe
This year’s city council election is all set to go.
None of the nine candidates who filed last week dropped out of the race by Friday’s deadline.
Three incumbents, Anam Miah, Abu Musa and Saad Almasmari, are defending their seats.
Their challengers are: Robert Zwolak, Nayeem Choudhury, Carrie Beth Lasley, Mohammed Hassan, Mohammed Alsomiri and Justin Jessop.
They will all face off in the Aug. 3 Primary Election. The top six finishers in that election will move on to the November Election.
Some of the names should be familiar to voters.
Zwolak is a former city clerk for Hamtramck, and has also served before on city council. Hassan is also a former councilmember.
Both Choudhury and Alsomiri have run before for council. Alsomiri is renovating the former Shopper’s World building on Jos. Campau and Yemans.
Lasley kicked off the campaign season with a protest outside of city hall last Tuesday before the council meeting.
A handful of firefighters and residents gathered at the front door, and held signs protesting against merging the police and fire departments into a single public safety department.
There is no current plan to do that, but the council recently voted on a new contract with the city’s police brass to allow for a transition into a public safety department “should (city) management move forward with such implementation in the city’s future.”
Police officers also recently agreed to a similar clause in their new contract a few months ago.
Councilmember Andrea Karpinski was the only councilmember to vote against it.
“The city manager and city attorney will tell you that including a unified command clause in the police contract is a bargaining tactic,” Lasley said on her campaign Facebook page.
“How effective can a bargaining tactic be if they are saying it is merely a bargaining tactic? It is either the worst bargaining tactic ever rolled out, or the residents are being gaslit. …”
May 3, 2019

6 Responses to And they’re off and running