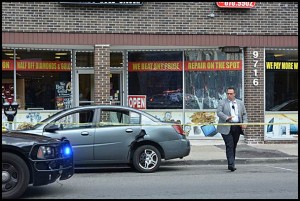 An armed robbery attempt at a Jos. Campau jewelry store ended up with one suspect dead.

Details were sketchy at press time Thursday, but police say that at about 3 p.m. three young men walked into Mike’s Detroit Jewelry & Pawn Shop at 9712 Jos. Campau and one of the suspects held a gun to a security guard.

The guard, however, grabbed the gun and shot the suspect.

“The other two suspects then gave up,” said Police Max Garbarino.

The two suspects were arrested. Their identities were not available.

During the investigation police received a tip of the getaway vehicle, but at press time it was not certain.

Hamtramck has been experiencing a series of street robberies in recent weeks, but nothing this brazen has occurred in recent times.