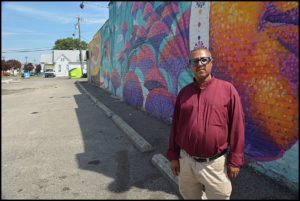 City Council candidate Mohammed Alsomiri is among several residents who are seeking to save a Yemeni-themed mural from being blocked from view. A developer wants to construct a building in the lot next to the mural.

By Charles Sercombe
One of Hamtramck’s most treasured murals may disappear from view in the near future.
The mural, depicting landscapes and people of Yemen, is on the side of a restaurant building at Jos. Campau and Goodson.
The owner of the Yemen Café, Ali Al-Zuebairi, wants to construct a building in the lot he owns that is next to the mural.
Plans call for the construction of a two-story building with retail space on the ground floor and living space on top.
That plan has already been approved by the city’s Plan Commission, but final approval is needed by the city council.
At last Tuesday’s council meeting, a resolution to approve the building was pulled off the agenda because there are ongoing negotiations with the lot owner, Al-Zuebairi, to sell the lot and build elsewhere.
The mural was commissioned by OneHamtramck, a self-described “independent non-governmental progressive organization, dedicated to bringing communities together in the diverse city of Hamtramck.”
The mural was created by artist Dasic Fernandez, and it cost the organization just over $20,000.
The organization’s Executive Director, Bill Meyer, told the council that he is talking with Al-Zuebairi about trading his lot for another that is behind it.
A meeting is scheduled for next Thursday (Aug. 29) between the city administration and Al-Zuebairi, to see if a deal can be made. Al-Zuebairi could not be reached for comment.
He reportedly wanted $120,000 for the lot, but has recently come down to $80,000.
Meyer, of OneHamtramck, told the city council that price is “exorbitant.”
The deal, however, is complicated. It requires a land swap, the selling of a city lot, waiving some zoning issues and making Goodson St. traffic run both ways instead of just one-way eastbound.
Sources told The Review that the mural organizers have themselves partly to blame, for failing to secure the lot before commissioning the painting.
City council candidate Mohammed Alsomiri told The Review that he is willing to help financially to purchase the lot. He owns the building that hosts the mural.
“I want to help the community,” he said.
If no deal is reached, there is little the city council can do legally to prevent the construction of the building. However, that didn’t stop Mayor Karen Majewski from opposing the plan when the Plan Commission voted on it recently.
She was the sole no vote.
Aug. 23, 2019