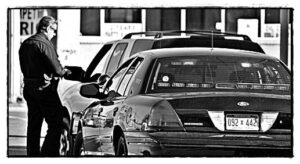 For the second time, city officials turned down a proposal to hire more police officers. The proposal was made to reduce the cost of police overtime and also to beef up patrols.

By Charles Sercombe
For the second time, city officials have rejected a proposal to hire additional police officers.
City Councilmember Fadel Al-Marsoumi has been behind both proposals.
The first time around, the council deadlocked on the vote, and forced Mayor Karen Majewski to break that tie. She voted against it.
When that proposal was considered, back in September, Al-Marsoumi said the additional officers are needed because it “was long overdue. Our police department is understaffed.”
There are 29 officers and detectives in the department, which includes Police Chief Anne Moise.
The proposal would have cost the city an additional $285,000. The city is currently in deficit spending, and is relying on a dwindling budget surplus to make ends meet.
Al-Marousmi’s proposal came at a time when there has been talk nationwide to “defund” police departments. That backlash came after numerous media reports of minorities, particularly African-Americans, being killed by officers during arrests.
The most prominent case was the death of George Floyd in Minnesota, who was choked to death by an officer who used his knee to subdue Floyd while he was on the ground, despite Floyd saying he could not breathe.
The city administration supported the hiring of more officers, saying in a note to council:
“For years, due to city budgetary constraints, the police department staffing levels have been decimated to far below necessary levels. Increasing police staffing levels will provide additional safety to the community.
“It will provide additional resources for response to crimes, traffic-related issues and other police-related matters. It will allow officers to participate in more community patrols and community-related policing.
“It will also assist in reducing costly overtime.”
In this week’s council meeting, Al-Marsoumi’s proposal did not receive support from his colleagues to even consider it for a vote. He changed his resolution this time around to hire three additional officers, instead of four.
His proposal once again met resistance from some residents.
Bill Meyer, who has been an outspoken critic of the city administration, questioned why the proposal came back.
“What part of ‘no’ do you not understand?” Meyer said. “Don’t be financially irresponsible.”
Al-Marsoumi said the hirings would actually save the city money in overtime spending in the department, add more community patrols, and crack down on traffic issues – something residents have long demanded that the department step up its enforcement of.
In Tuesday’s council meeting, the council also agreed to add $180,000 to the police department’s budget because of overtime costs.
Council-elect Amanda Jaczkowski suggested that, instead of hiring officers, the city should consider hiring social workers to deal with non-violent issues.
For now, the issue appears to be dead. Al-Marsoumi did not seek re-election, and his term ends Dec. 31 of this year.
Posted Nov. 12, 2021

3 Responses to As police OT increases, city council says no to more officers