Attorney’s tale of overcoming challenges is a message of believing 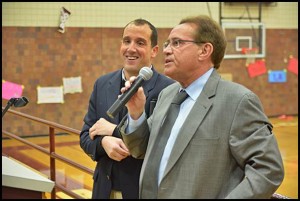 Hamtramck Public School Superintendent Tom Niczay introduces attorney Richard Bernstein who gave a talk to students about how he overcame many challenges in life, including being born blind.

By Charles Sercombe
There are motivational speakers, and then there is attorney Richard Bernstein.
Yes, that Richard Bernstein you see in television ads. Bernstein met with Hamtramck Public Schools students last week in the community center, and talked about the challenges in his life, as well as the universal challenges we all face.
“You come to realize the tremendous power within you,” he said.
Bernstein knows a thing or two about tapping into that “power within.”
He was not dealt a fair hand in life, being born blind, but you’d never know it was much of an obstacle for him to succeed and become a lawyer and practice law in federal court.
He didn’t stop there. Bernstein took up running and entered 18 marathons. And if that wasn’t enough, he took up the challenge of participating in an Ironman Triathlon.
Ironman Triathlon? That’s where you first swim a few miles, then bike 100 miles or so, and then finish off with a 20-some mile run.
All in a little over 12 hours. And doing it blind.
One day, though, all of those accomplishments were pushed aside when his pelvis was crushed by an out-of-control bicyclist going about 30 miles-per-hour. The bicyclist crashed into Bernstein’s back while he was walking in a park in New York City.
It would be quite a while before he ever would get up on his own, let alone run a marathon.
Imagine spending 10 weeks being in such extreme pain you couldn’t get out of bed. He had a choice, though: Be an invalid for life, or start taking those little steps, as painful as they were, to get back to something resembling “normal.”
Doctors were stern with Bernstein, telling him from that point on recovery was up to him. Where does one get the inner-strength to pull that off when all seems impossible?
Not for the first time in his life, Bernstein tapped into the spiritual side of life.
“You have to believe that you are part of something grander,” he said.
Bernstein is part of the well-known Bernstein law family, which has saturated TV and billboards with ads featuring his father, Sam Bernstein, brother, Mark, and sister, Beth.
Richard Bernstein is now a leading candidate for the state Supreme Court in the upcoming Nov. 4 election.
Bernstein appears to have recovered from his injuries, and stands up firm and has no visible problem walking. The story he has to tell is riveting.
Speaking in dramatic, and heartfelt, tones, students sat in rapt attention as Bernstein talked about overcoming his many obstacles. (And as any guest speaker knows, it’s no small achievement in life to be able to get a roomful of kids to remain quiet and pay attention.)
At the end of the talk, the students gave him a thunderous applause.
For many Hamtramck students, who are immigrants trying to cope with fitting in with American customs and society, Bernstein’s message rang home.
“It’s through challenge and hardship,” he said, “you can achieve what is great.”