‘Banglatown’ development has some high rollers on board 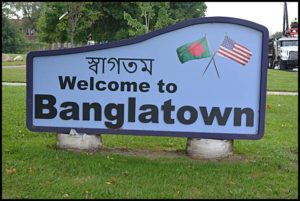 There are big development plans for the Banglatown neighborhood just north of the Detroit-Hamtramck border. It is hoped that development will eventually spill over into Hamtramck.

By Alan Madlane
A Detroit neighborhood revitalization project is likely to have a spillover effect for Hamtramck.
And a familiar business name is heavily involved. More on that momentarily.
In a recent article in Crain’s Detroit, several Detroit city departments are combining to formulate a neighborhood development plan, to build or remodel various existing buildings or now-vacant sites into housing, stores or restaurants in the Banglatown area of Detroit.
This is the area roughly bordered by Davison to the north, the railroad tracks west of I-75 to the west, Carpenter to the south, and Conant to the east.
The city has been soliciting bids by developers, and a number of sites have drawn concrete plans.
Prominent among the buildings awaiting bid quotes was the two-story one at 12449 Conant that once housed a strip bar named Starvin’ Marvin’s and then a club called the Adult Playground.
The deadline for those quotes had been set at last week Friday, Aug. 30.
Bingham Farms developer MHT Housing has an ambitious plan of its own. It seeks to build a nearly $17-million dollar apartment complex on the northeast corner of Carpenter and Charest that it is dubbed the Carpenter Apartments. It will feature 50 affordable units when completed.
The former Washington Trade School building at Dequindre and Lawley will likely be made available soon for bids, if it hasn’t been already.
And here’s where the “familiar business name” pops up.
Folks moving into these places should have some better surroundings to enjoy also, courtesy of a $5-million-dollar grant from Hamtramck’s old friend, American Axle.
The grant is intended to be used to improve streetscapes, parks, storefronts and housing. The city eventually envisions a complete rejuvenation of the area.
Not everything moves at a proper pace however; the Crain’s article makes mention of the old Transfiguration School building on Luce St. west of Mound, which has had a planned $6.4 million dollar transfiguration of its own into a 19-unit apartment building see little progress since announced back in 2017.
Is that the smell of money going “up the chimney”? Let’s hope not.
For while this is all, strictly speaking, within Detroit geographically, it’s entirely likely that it could spur Hamtramck to spruce up the north end a bit, in order to “keep up with the Joneses.”
And if that doesn’t happen? It’ll still be good to know that there would be some nice shops, restaurants, and parks just a stone’s throw away, for Hamtramckans to enjoy.
Tote that barge! Get those quotes! Break that ground!
We can’t wait to see what it’ll all look like when it’s done.
And what Bingham Farms developers’ idea of “affordable rents” are, too.
Sept. 20, 2019