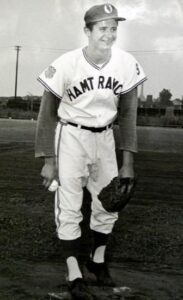 By Charles Sercombe
Hamtramck – and the nation – have lost a sports legend.
Art “Pinky” Deras died June 5 at the age of 75.
Deras not only excelled in sports at Hamtramck High School, he was known as the “Best Little League player ever.”
How’s that?
Back in 1959, he led his Hamtramck team to 13 straight victories in the Little League World Series.
During that season, he pitched 75 scoreless innings, and also pitched 10 no-hitters. He was equally impressive at the plate, with a batting average of .641, with 33 home runs and 112 runs batted in.
Fellow team member Tom Paciorek remembered Deras as being bigger and more mature than the other kids.
“At 12 years old, he was bigger, taller and stronger than the rest of us, and the greatest player ever at that age,” Paciorek told the National Polish American Sports Hall of Fame.
“He was just so much better than the rest of us.”
After Little League and graduating from HHS, he joined the St. Louis Cardinals baseball team, but stalled in their Double A farm league.
In his five-year minor league career, he never pitched an inning; the Cardinals tried to convert him to a third baseman, and then to the outfield.
He played 518 games in the minors, and only totaled 32 home runs. His best year at the plate, he hit .269 – for the Arkansas Travelers of the Texas League, the same year the Tigers were winning the World Series as underdogs to those same St. Louis Cardinals: 1968.
He later joined the Warren Police Department, and retired from there after 30 years of service.
Hamtramck was the last US team to win the Little League World Series – that is, until last year, when a team from Taylor captured that title.
In an interview with The Review last year, Deras had this to say about the downriver team: “I’m surprised it took so long! I never thought it would take 62 years, but I wish them the best.”
Deras is survived by his children, Kevin (Wendy) Deras, Deb (Paul) Budnick and Adam (Abbie Fletcher) and seven grandchildren; he is also survived by the mothers of his children, Carol Deras and Jane Chupailo.
Donations in his honor can be made to Hamtramck Parks at https://hamtramckparks.com. Click on the green box to donate.
You are asked to note that your donation is in memory of Arthur Deras for Art “Pinky” Deras Field, or donate directly to Hamtramck Parks Conservancy, c/o City of Hamtramck 3401 Evaline, Hamtramck, MI 48212
(Review reporter Alan Madlane contributed to this report.)
June 17, 2022

2 Responses to ‘Best Little League player ever’ passes on …